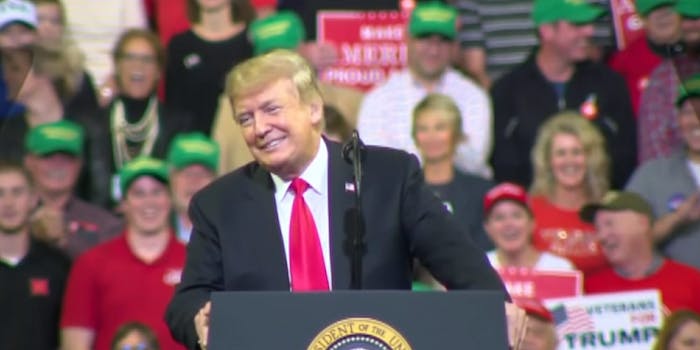 He's '99 percent' sure she leaked the letter.

The controversy began during a rally in Cedar Rapids, Iowa, where Trump methodically listed Democratic senators and attacked them one by one. After making fun of Sen. Cory Booker (D-N.J.) and Sen. Richard Blumenthal (D-Conn.), he turned to Feinstein, claiming that she purposefully leaked Dr. Ford’s letter accusing Kavanaugh of sexual assault.

“Did you leak the documents?” Trump quipped as the crowd behind him gradually began chanting “lock her up.” After he heard the chants, Trump laughed and smiled.

Trump then compared voting Democrat to handing “matches to an arsonist” and giving “power to an angry left-wing mob.”

“They would turn our country so fast into Venezuela—and Venezuela’s not doing too well, folks,” Trump told the crowd. “If you want to drain the swamp, you must defeat the Democrats, or you’re gonna have one hell of a swamp.”

Feinstein has since denied Trump’s statements and criticized his rhetoric.

“Dr. Blasey Ford knows I kept her confidence, she and her lawyers said so repeatedly,” Feinstein said according to the Washington Post. “Republican senators admit it. Even the reporter who broke the story said it wasn’t me or my staff. The president’s remarks are ridiculous and an embarrassment.”

While Feinstein was the first senator to receive Dr. Ford’s letter, she has vehemently denied leaking it. Instead, she claims she received the letter in July and protected its confidentiality since then, as part of Ford’s request. The letter later leaked to the Intercept, where bureau chief Ryan Grim confirmed Feinstein did not leak the letter.

It remains unclear who leaked Dr. Ford’s original letter, which sparked one of the most contentious Supreme Court confirmations since Anita Hill’s sexual harassment accusations against Clarence Thomas in 1991. Either way, Trump’s accusations last night sparked concern across Twitter as onlookers realized Trump was more than happy to target female politicians who went against his administration’s goals.

At the same rally where President Trump called Democrats dangerous, unhinged, and an "angry left-wing mob"

It appeared that the president laughed as the crowd chanted that Sen. Dianne Feinstein should be locked up. https://t.co/YxZ5Tj7mT1

interesting how "lock her up" has become just a standard chant now at trump rallies to levy against any woman supporters don't like https://t.co/7KKUf57xQe

Oh hey look it’s the same people screaming about due process for Kavanaugh chanting “lock her up” at a Trump rally. https://t.co/QoxJ70p0DV

So now it’s “lock her up” for ANY female political opponent of Trump, including one of the longest-serving US senators in our country.

He has been doing this for more than 2 years.

He is a threat to democracy.

Where are you now, @JeffFlake? https://t.co/IoagGgEBqd

Some hope the midterm elections will stop Trump and his supporters in their tracks and prevent his base from feeling emboldened to go after more women in politics.

Trump's Iowa rally chanted "lock her up"… about Dianne Feinstein.

It's not even just Hillary anymore. Now the MAGA hats want to imprison any woman politician they dislike. Trump supporters might not be better than this, but America is. Vote accordingly. pic.twitter.com/JPWc1DREP1

Senator Mitch loves Trump's angry mobs, like the one that killed Heather Heyer.

Real mobs. Huh?#TheResistance will not forget.

This is what an actual mob looks like. A party whose only contribution to the political discourse is the frenzied “lock her up” and dog-whistling “MAGA” appeals to the lowest common denominator of the lowest of lowlifes. If you don’t want them running the country, VOTE on Nov 6. https://t.co/DC6KlGBpPX

Trump calls women who speak out against their sexual abusers “evil” and his supporters shout “lock her up” about every strong woman that won’t bow down to him.

This is who the GOP is.
Vote them out.

Anytime you hear some Trumper shout “lock her up”, make sure 3 women you know are registered to vote. https://t.co/dXTN4xbnpD

President Trump has since turned to Twitter, criticizing the media because “92 percent of stories on Donald Trump are negative on ABC, CBS, and ABC.” He went on to call these publications “FAKE NEWS!” and argue they are missing out on “positive events and victories” for the administration.