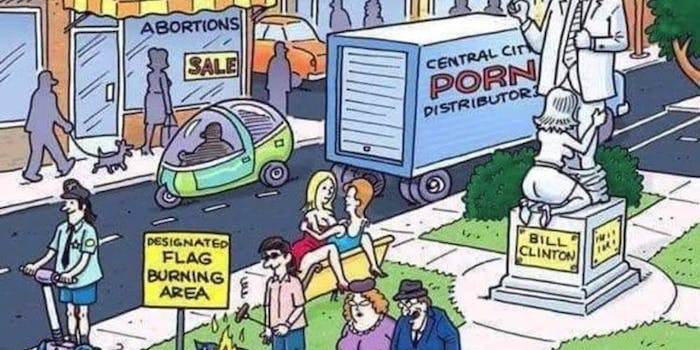 Liberals love this cartoon about ‘the future the Left wants’

It shows abortion clinics and 'pot-mart' so, who's complaining?

A comic aiming to mock the American left and their demands has backfired after a user posted it late on Sunday evening:

Twitter user Lane, whose bio says he’s an attorney in Odessa, Texas, posted a comic with the caption “This is the future the Left wants.”

The future liberals (and the left) want is a popular meme among conservatives, talking about how left-wing politics will destroy the nation.

One building reads “U.S. Government Abortion Clinic” with a window that says “Abortions” and “SALE.” Another sign hangs above the building, reading “Abortions on demand.”

The irony of the cartoon is that it’s intended to look like a dystopian future of sorts.

But people were quick to point that out that abortion clinics being funded enough to have cinema arrow signs and plenty of marijuana isn’t too bad.

Imagine thinking a pot-mart was a bad thing

Additionally, if all the women are lesbians – who needs all those abortions?

No no no no no, see, you forgot to throw away the capitalists.

My favourite part is how nobody is being shot

Some pointed out the obvious inaccuracies about the portrayal of the left:

But these people are all white. Even when trying to mock the left, they still can’t fathom a world with people of color.

I'm the abortion provider. Sadly, here in utopia, my services are decreasingly necessary so I've had to put them "on sale". Must be the comprehensive sex education and freedom to be who you are.

Though it cracks me up that they think lesbians are wearing low cut Jessica rabbit dresses with bouncing cleavage. They can’t even get lesbians right.

And too many people are (justifiably) upset at the sacrilegious lack of taco trucks, a reference to a right-wing meme about Hillary Clinton.

Where are the taco trucks on every corner?

Some commented with their version of “right-wing dystopia.”

Artist Rhiannon Rotondo responded by replacing the text with “No abortions by demand of govt,” “U.S. Govt Klan Klinic,” “Guns, Cages & Beyond,” and “Central ICE Distribution.”

In the future the Right wants, every building is a church, Chick-fil-A or concentration camp, klan hoods are a required uniform, and cops patrol the streets in tanks to police a population overrun by meth heads with AR-15s. But you can’t actually see any of that because of smog.

The comic is signed but it’s not clear who the artist is. Lane implied in a follow-up tweet that he didn’t draw it and it was posted as satire: