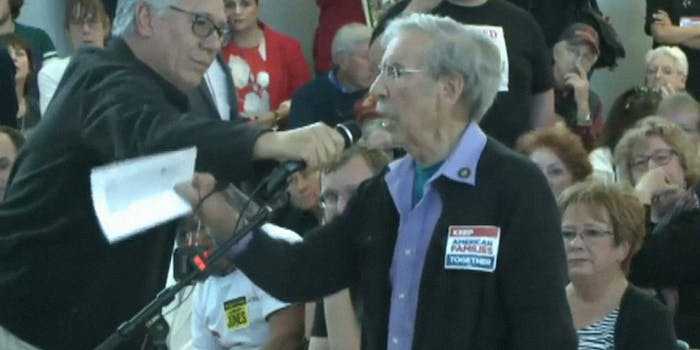 'History is not on your side.'

An 87-year-old Holocaust survivor confronted the acting director of the Department of Immigration and Customs Enforcement (ICE), Thomas Homan, at an event in California on Tuesday evening, telling Homan that the agencies activities fall on the wrong side of history.

The dramatic confrontation happened at a public forum about immigration when the elderly Bernard Marks stood to address Homan over President Donald Trump’s “crackdown” on undocumented immigrants.

“When I was a little boy in Poland, for no other reason but for being Jewish, I was hauled off by the Nazis,” Marks said. “And for no other reason, I was picked up and separated from my family, who was exterminated in Auschwitz. And I am a survivor of Auschwitz and Dachau.”

Trump signed an executive order soon after taking office that permitted ICE to target any immigrant living illegally in the States. Since then, ICE raids have been reported across the country. The agency insists that the efforts are “routine,” but under former President Barack Obama, the agency focused on targeting individuals with serious criminal histories, rather than engaging in sweeping operations.

Marks also warned the Sacramento County Sheriff Scott Jones, the event’s host, that he should not cooperate with enforcing the federal policies.

“I spent five and a half years in concentration camps, for one reason and one reason only: Because we picked on people. And you, as the sheriff, who we elected as sheriff of this county, we did not elect you for sheriff of Washington, D.C. It’s about time you side with the people here,” Marks said.

“The Supreme Court Justice of the State of California objected to ICE coming in and taking people away from the courts. Don’t tell me that this is a lie,” he continued. “We stand up here, Mr. Jones, don’t forget. History is not on your side.”

In response, Homan insisted that his agency’s actions were routine and that his agency would continue to make arrests at courthouses, although he said the arrests would not target victims of crimes, as ICE has in the past.

Acting ICE director Thomas Homan will be discussing the role of his organization at a meeting that has drawn widespread criticism from pro-immigration groups.