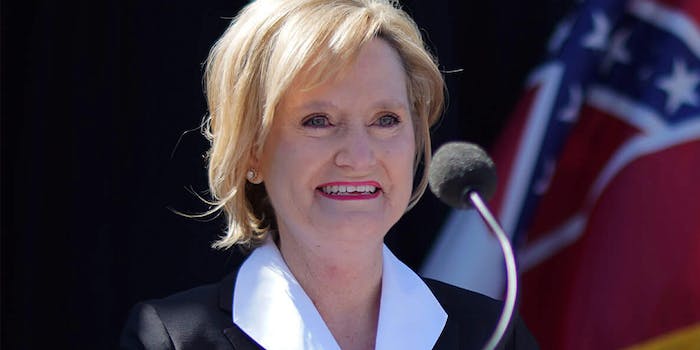 Google requests refund from candidate who joked about hangings

The tech giant said would not have contributed to her campaign had it known about the remarks.

Update 5:11pm CT, Nov. 26: A representative from Google confirmed to the Daily Dot on Monday that the company had requested a refund of its donation to Mississippi Sen. Cindy Hyde-Smith’s campaign.

The runoff for the Mississippi Senate seat is on Tuesday. Other corporations, including Walmart, requested refunds from the campaign days ago. Google came under fire for donating to Hyde-Smith’s campaign when video of the candidate joking about lynching became public earlier this month. At the time, Google said it regretted the donation but did not disclose whether it had requested a refund.

The original report follows below.

According to FEC filings, Google donated $5,000 to Mississippi Sen. Cindy Hyde-Smith, who was slammed for joking about lynching at a campaign event on Nov. 2.

“If he invited me to a public hanging, I’d be on the front row,” Smith said of a supporter, who she’s shown on video with.

Smith later defended her remarks, saying “I used an exaggerated expression of regard, and any attempt to turn this into a negative connotation is ridiculous.”

At a press conference on Monday, Hyde-Smith dodged questions about the remarks, saying “I put out a statement yesterday, and that’s all I’m going to say,” repeatedly.

In her defense, Mississippi Gov. Phil Bryant (R) blamed African-Americans for not attending the opening of a civil rights museum alongside President Donald Trump, and by repeating a talking point about how abortion providers target African-American women.

Hyde-Smith will compete with Democrat Mike Espy in a runoff election on Nov. 27. Espy is African-American.

The two are competing in a state with a sordid, painful history of lynchings, as a reporter pointed out in Monday’s press conference. According to the NAACP, Mississippi had the largest number of lynchings during the time period 1882-1968, with 581 lynchings.

When asked about the company’s contribution to Hyde-Smith’s campaign, a Google spokesperson told the Daily Dot in an email that, “This contribution was made on November 2nd before Senator Hyde-Smith’s remarks became public on November 11th. While we support candidates who promote pro-growth policies for business and technology, we do not condone these remarks and would not have made such a contribution had we known about them.”

Google has not said what specific policies caused the company to donate to Hyde-Smith’s campaign.

As Judd Legum pointed out in his newsletter, Popular Information, Google also donated $10,000 to the Making America Prosperous PAC, which gave money to Iowa Rep. Steve King the same week several companies pulled their support because of King’s racist views.