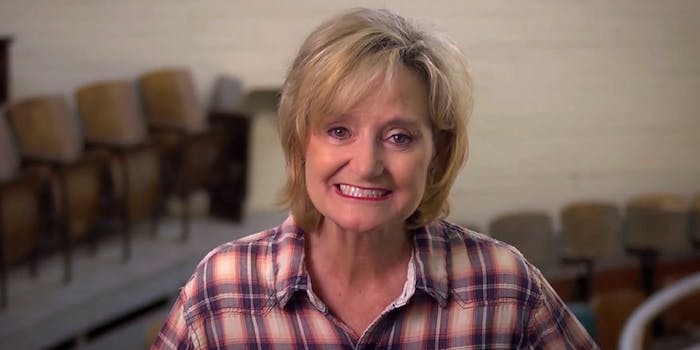 Somehow everyone else is in the wrong for making her statement about public hangings negative...

Mississippi Sen. Cindy Hyde-Smith has pushed back on her critics who are shaming her for joking about attending a public hanging and standing in the front row.

Hyde-Smith, a Republican who is in a runoff election following her Senate appointment in April, was recorded saying the statement to a group of supporters. Speaking about a person who had invited her to a speaking engagement, Hyde-Smith said, “If he invited me to a public hanging, I’d be on the front row.”

"If he invited me to a public hanging, I'd be on the front row"- Sen. Cindy Hyde-Smith says in Tupelo, MS after Colin Hutchinson, cattle rancher, praises her.

Hyde-Smith is in a runoff on Nov 27th against Mike Espy. pic.twitter.com/0a9jOEjokr

Activist Lamar White Jr. tweeted out the video on Sunday, stating Hyde-Smith was with cattle rancher Colin Hutchinson at the time of the comment. According to Mississippi Today reporter Adam Ganucheau, White didn’t record the video at the event himself, but had received the Nov. 2 clip from a source and stated he vetted it himself.

Hyde-Smith’s opponent in the runoff, Democrat Mike Espy, is a Black man. Hyde-Smith is Mississippi’s first female representative in Congress, while Espy could become the state’s first Black senator since Reconstruction if elected in the Nov. 27 runoff.

The context of Hyde-Smith’s comment matters greatly, and Mississippi’s history is steeped in violence against Black people, including public hangings at which white people would watch, and even take pictures. According to the NAACP, via the Washington Post, nearly an eighth of lynchings in the U.S. between 1882 and 1968 occurred in Mississippi.

Below is the Espy for Senate Campaign statement on Cindy Hyde-Smith's "public hanging" comments: pic.twitter.com/zccgQelDWt

In a statement Sunday, Espy called Hyde-Smith’s phrase “reprehensible,” saying her words “show that she lacks the understanding and judgment to represent the people of our state.” The NAACP called her words “sick,” and that she should have known better, according to the Post.

Several others lambasted her online, shaming her use of the comment as if it were a common, household expression.

And her crowd of Republican supporters laughed and applauded at her “joke” about the public hanging.

WTAF. Running to donate to Espy.

I am trying to remember the word they used to use in Mississippi for public hangings…..it starts with an “L.”

It might appear that Hyde-Smith, who has been supported several times by President Donald Trump, understood that her turn of phrase was extremely negative in the first place. She insinuated that the person who invited her to the speaking engagement was so persuasive that he could even convince her to go to something as horrific as a lynching and that she’d go out of her way for him to even be in the first row.

Hyde-Smith, however, has criticized her critics by saying that any “attempt to turn [her phrasing] into a negative connotation is ridiculous.” In a statement, she said she was using the comment, that she’d be in the front row of a public hanging, as an “exaggerated expression of regard” for the person who invited her to a speaking engagement.”

“In a comment on Nov. 2, I referred to accepting an invitation to a speaking engagement. In referencing the one who invited me, I used an exaggerated expression of regard, and any attempt to turn this into a negative connotation is ridiculous.”

The runoff election between Hyde-Smith and Espy is on Nov. 27.