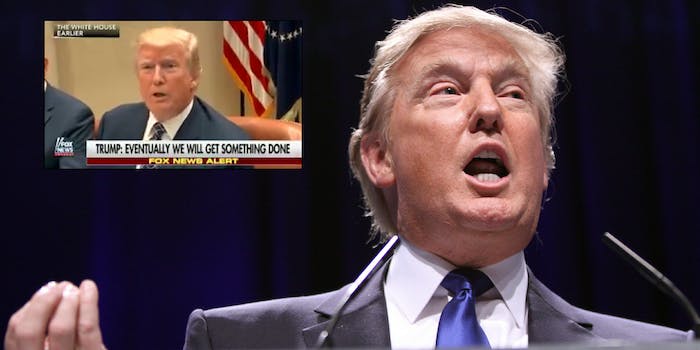 "Eventually We Will Get Something Done"

A Fox News chyron on Tuesday practically was begging for Twitter’s input—and they didn’t disappoint.

The chyron—the name for lower-third graphic during a television broadcast—came as President Donald Trump was addressing the media following the news that Republicans would not be able to simply repeal the Affordable Care Act, due to lack of votes.

As he was speaking, Fox News’ chyron flashed: “Trump: Eventually We Will Get Something Done.”

As you can imagine, the choice of words caught the eye of people on Twitter.

Chyron of the day? pic.twitter.com/CQJeuIaawK

#CampaignTrump "I'm the only one who can get things done." #PresidentTrump "Eventually we will get something done" https://t.co/tIXAxgBI4b

Trump after his 100 days in office and declining approval rateing: "Hopefully we will eventually get something done"
Me: pic.twitter.com/vCSz2r5PnB

Actually, Donald, we're good. The less you get done the better.

Trump went from #MAGA to #EWWGSD (Eventually We Will Get Something Done). It's also the same sound ppl make when they shake hands with him. pic.twitter.com/jdcyTGmKEn

"Eventually we will get something done."

The first six months of Trump’s presidency have been marred by controversies and false starts. While he has managed to overturn many Obama-era regulations, Trump’s most high-profile initiatives—building a wall along the U.S.–Mexico border, tax reform, and the repeal and replace of Obamacare chief among them—have hit firm roadblocks.

Despite his complaints about the “fake news” media’s coverage of him and the Democrats’ stonewall tactics, many of the clearest struggles Trump faces have come as a result of his party, himself, and his associates. Eventually, however, he may be able to overcome these hurdles.