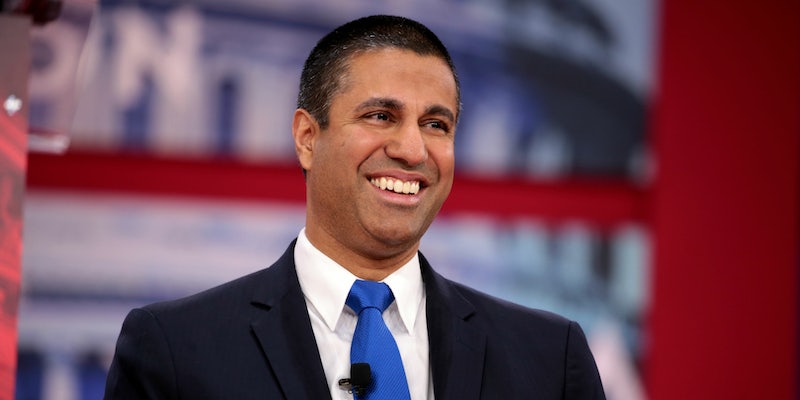 Either send your complaint to the company in question or pay up.

Ajit Pai, the internet’s favorite anti-net neutrality whipping boy, wants you to pay to hate on him. The Federal Communications Commission (FCC) is voting on a rule that could result in a $225 charge for anyone who wants to lodge a formal FCC complaint.

It’s a two-part “solution” being proposed by the FCC to ostensibly clean up the complaint consideration process, but it runs into some obvious (and somewhat shady) hurdles, TechSpot reports.

First, people who file complaints about companies and utilities that operate under FCC jurisdiction (say Comcast or Verizon) will have their complaints forwarded to the company in question. The obvious issue is that most customers are only contacting the FCC after exhausting their options with the company in question (and we don’t need to tell you how awful modern customer service is).

If that option doesn’t work, a consumer’s only other method of having their complaint addressed would be paying the FCC a $225 fee. As it stands now, the FCC is required to address every complaint submitted, which can result in a huge backlog of complaints. At the end of 2017, more than 20 million complaints (many fraudulent) about the rollback of net neutrality rules were submitted. According to a Pew Research study, 57 percent of those complaints were from duplicate or temporary email addresses.

Under the newly proposed plan, none of those comments would have been considered by the FCC.

“We are deeply concerned that the Federal Communications Commission (FCC) is poised to adopt a rule that would eliminate the agency’s traditional and important role of helping consumers in the informal complaint process,” the letter states. “Creating a rule that directs FCC staff to simply pass customers’ informal complaints on to the company and then to advise consumers that they file a $225 formal complaint if not satisfied ignores the core mission of the FCC — working in the public interest.”

The commission is set to vote on the rule on Thursday.

Pai has been the subject of no small amount of controversy and internet ridicule, including a formal investigation for a broadcasting rule change that allegedly benefits the conservative Sinclair Broadcasting. Even other FCC officials criticized the decision, calling it a “troubling pattern.”

Update July 12, 12:29am CT: After significant backlash, sources familiar with the matter say the FCC is dropping the new provision that would require consumers filing formal complaints to pay $225, according to a report by the Washington Post. Democratic FCC Commissioner Jessica Rosenworcel requested the removal of the rule, criticizing it as “terrible” and “bonkers” in a tweet to late night show host Jimmy Kimmel.

Several officials, who spoke the Washington Post on the condition of anonymity, claimed the political backlash as a reason why the FCC will not vote on the proposed rule Thursday. One official added that the proposal to charge for making formal complaints was never a “conservative plot” meant to disenfranchise consumers.