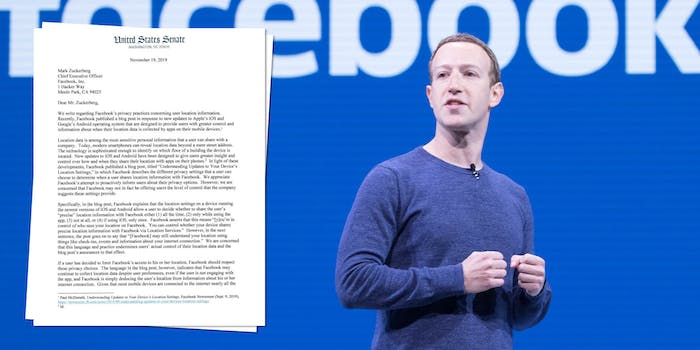 Congress thinks Facebook is misleading you about its location tracking

The letter was in response to a blog post published by the company in September where it said it would adhere to a user’s “most restrictive settings choice” in terms of sharing location data on their Android or Apple phones.

“We appreciate Facebook’s attempt to proactively inform users about their privacy options. However, we are concerned that Facebook may not in fact be offering users the level of control that the company suggests these settings provide,” the letter from Coons and Hawley reads.

The senators pointed to one part of the post where Facebook says that a user is “in control of who sees your location on Facebook” but adds that it “may still understand your location using things like check-ins, events and information about your internet connection.”

The senators wrote that the company using information about an internet connection specifically leaves them “concerned.”

If a user has decided to limit access to their location, @facebook *must* respect that decision, period.

“The language in the blog post, however, indicates that Facebook may continue to collect location data despite user preferences, even if the user is not engaging with the app, and Facebook is simply deducing the user’s location from information about his or her internet connection,” the letter reads. “Given that most mobile devices are connected to the internet nearly all the time, whether it’s through a cellular network or Wi-Fi connection, this practice would allow Facebook to collect user location data almost constantly, irrespective of the user’s privacy preferences.”

Coons and Hawley requested answers to their questions by December 12. You can read all of their letter here.