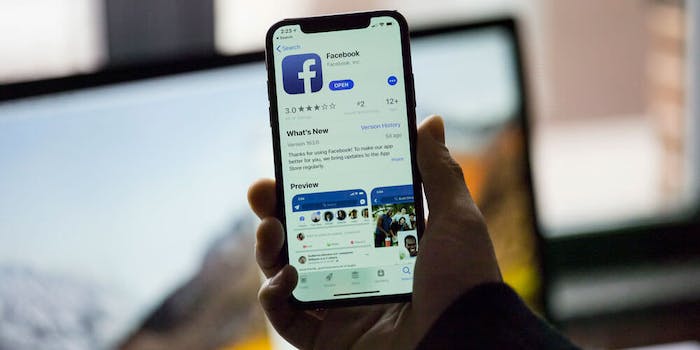 The issue appears to be an unintentional glitch, but many users feel they can't trust Facebook.

Facebook has been accused of secretly accessing iPhone users’ cameras as they scroll through the app’s feed.

The claim was made on Saturday by Twitter user Joshua Maddux, who tweeted a video of his camera activating while using Facebook’s iPhone app.

“When the app is open it actively uses the camera,” Maddux said. “I found a bug in the app that lets you see the camera open behind your feed.”

Found a @facebook #security & #privacy issue. When the app is open it actively uses the camera. I found a bug in the app that lets you see the camera open behind your feed. Note that I had the camera pointed at the carpet. pic.twitter.com/B8b9oE1nbl

Maddux went on to state that he was able to replicate the issue on five different iPhones, all running iOS 13.2.2. The bug was not present though in iPhones running iOS 12.

Update, I have been able to confirm this across 5 different iPhones all running 13.2.2. I will note that iPhones running iOS 12 don't show the camera (not to say that it's not being used).

For the bug to work, a user must have already granted the Facebook app access to their phone’s camera and microphone. Some speculated that the issue was related to Facebook’s Story feature, which automatically opens a user’s camera when selected.

Guy Rosen, the Facebook vice president of integrity, responded to Maddux Tuesday morning and confirmed that the issue was being investigated.

Thanks for flagging this. This sounds like a bug, we are looking into it.

Shortly after in a statement to TechCrunch, Facebook stated that the issue was, in fact, a bug and not intentional.

“We recently discovered that version 244 of the Facebook iOS app would incorrectly launch in landscape mode,” a Facebook spokesperson said. “In fixing that issue last week in v246 — launched on November 8th — we inadvertently introduced a bug that caused the app to partially navigate to the camera screen adjacent to News Feed when users tapped on photos.”

The company went on to state that it has seen “no evidence of photos or videos being uploaded” due to the bug and that a fix is set to be deployed.

Given Facebook’s troubled history with privacy though, many users online remain spooked even though the issue appears to be accidental.

Users who are still concerned though can revoke the Facebook app’s access to their camera and microphone in the iPhone’s Settings menu.