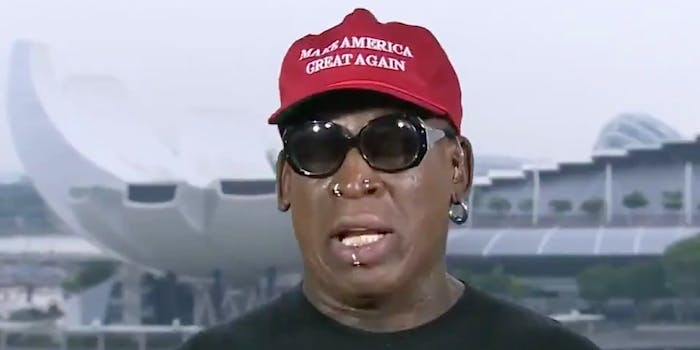 What a bizarre time.

Rodman told the news network from Singapore he had always been a supporter of North Korea, even while he was threatened for defending the country. He also said former President Barack Obama never gave him “the time of day” on the subject.

“It’s a great day. I am here to see it. I’m so happy,” Rodman said, becoming emotional throughout the interview.

"Today is a great day," former NBA star Dennis Rodman says in an emotional interview in which he describes his relationship with North Korean leader Kim Jong Un https://t.co/atvQwe7jo0 pic.twitter.com/dEgQf3kBtE

On Twitter, conservatives celebrated Trump’s meeting with Kim—and Rodman’s heartfelt support of it.

Trump and Kim are expected to discuss a contingent path to end to North Korea’s nuclear weapons program. Although the president has admitted it’s possible the plan “won’t work out,” on Monday he tweeted there was “excitement in the air” surrounding the meeting.

Over the weekend, Trump distanced himself from E.U. leaders by backing out of the G7 summit to meet with Kim. The tension between Trump and Western European leaders is so great that even top-level officials were reposting memes about it.