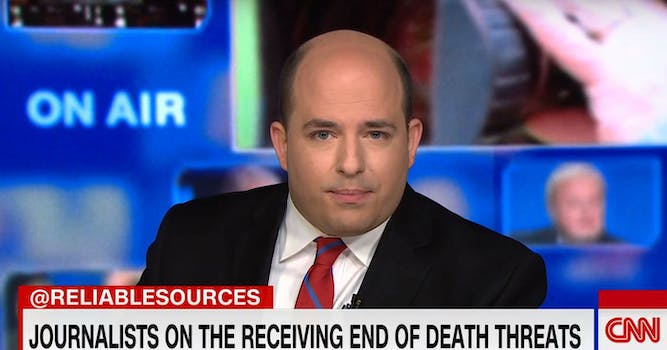 Threats and vile comments are nothing new in the world of journalism. In the age of President Donald Trump, who regularly calls the press an “enemy of the people,” those comments have grown emboldened by a leader who supports the denigration of journalists.

CNN’s Brian Stelter has assuredly received his fair share of threats, but on Sunday, the anchor chose to share a particularly specific and charged threat made by a caller saying that he would shoot him if he saw him.

The comment, which came from a man identifying himself as “Don,” came during a C-SPAN call-in show.

“They don’t even know these Americans out here, and they’re calling us racist because we voted for Trump? Come on, give me a break. They started the war. I see him, I’m going to shoot him.”

Stelter pointed out that the caller’s comment seems to be predicated on the falsehood that Stelter called all Trump voters racists, which there is no evidence of. Stelter theorized that the caller might have watched Fox News’ Sean Hannity the previous night, where the pro-Trump host played a 2-year-old clip of Stelter commenting on whether or not “racial anxiety” played a role in Trump’s rise to political prominence.

Stelter was sure to repeat that he doesn’t blame Hannity or any specific outlet or personality for spurring the caller’s comments.

“I don’t know if the C-SPAN caller watched Hannity,” Stelter said. “I’m not blaming Hannity. I just thought the timing was odd.”

Stelter also referenced a previous report by MSNBC’s Katy Tur about comments sent to her that threatened rape and murder.

“Friday’s threatening phone call is a just a tiny illustration of the threats that are out there,” Stelter said. “Many journalists who cover politics say they are receiving more and more threats nowadays in the Trump era.”

Comments like these come in the wake of  Trump’s own recent comments about the media, many of which refer to the press as an “enemy of the people.” This what Trump tweeted early Sunday morning.

The Fake News hates me saying that they are the Enemy of the People only because they know it’s TRUE. I am providing a great service by explaining this to the American People. They purposely cause great division & distrust. They can also cause War! They are very dangerous & sick!

More observant readers may note that President Trump accuses the media of possibly starting a “war.” It’s unclear if he means a war between countries or the “war” that people like “Don” say the press started, threatening to shoot the media on site.

Trump also repeated the “enemy of the people” comment at a recent rally.