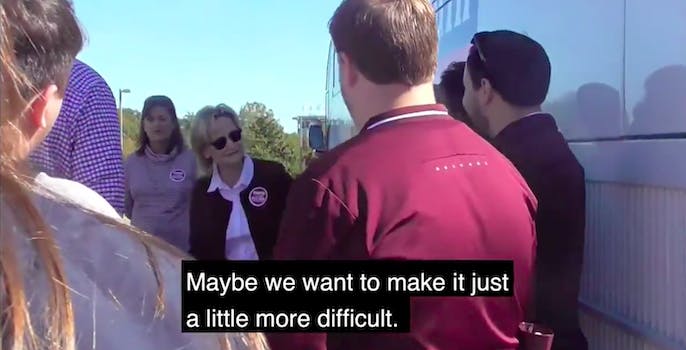 Cindy Hyde-Smith made her second major gaffe of the week.

You wouldn’t think Cindy Hyde-Smith’s week could get any worse.

It’d be hard to top her first gaffe, where a video leaked that showed her joking about enthusiastically attending a public hanging—in a state that has a history of ]lynching Black people.

The Mississippi GOP senator is campaigning in a run-off election for her seat in Congress against a Black opponent, Mike Espy, and leading civil rights groups denounced her, calling her comments “sick.”

Hyde-Smith refused to apologize. And now she’s not backing down from another damning gaffe.

Friday morning, another video of Hyde-Smith leaked, where she said preventing liberals from voting is a “great idea.”

“[There’s] a lot of liberal folks in those other schools who that maybe we don’t want to vote,” she said. “Maybe we want to make it just a little more difficult. And I think that’s a great idea.”

Cindy Hyde-Smith on voter suppression: "And then they remind me, that there's a lot of liberal folks in those other schools who that maybe we don't want to vote. Maybe we want to make it just a little more difficult. And I think that's a great idea." Nov 2nd in Columbus, MS. pic.twitter.com/OxNY77XCft

In response to the criticism, Hyde-Smith tweeted, wondering if it was OK to joke anymore.

In an election that has seen voter suppression efforts across the country where there’s also (probably not coincidentally) been an influx of Black candidates running, it’s probably not OK to joke about sensitive history.