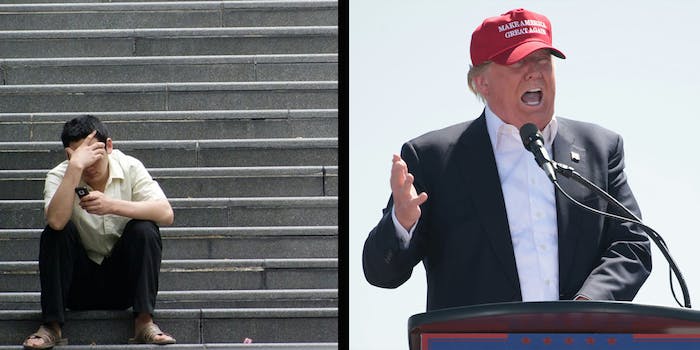 Most Americans think the U.S. is at its ‘lowest point’ in history

Over 60 percent of Americans are stressed about the future of the country.

The current state of affairs in the United States has Americans really stressed out.

The poll found that, essentially, most Americans are wringing their hands and grinding their teeth with the way the country is currently headed.

Nearly two-thirds of Americans polled said the future of the country is a “very or somewhat significant” source of stress—more than money and work. Meanwhile, 59 percent of Americans said the country is at its lowest point in history that they’ve lived through–including World War II, the Cuban Missile Crisis, and the 9/11 terrorist attacks.

Specifically, 59 percent of Americans said the current social divisiveness causes stress, and a majority of adults from both major political parties said the country’s future was a source of stress. However, the feeling was higher among Democrats (73 percent) compared to Republicans (56 percent). Almost 60 percent of independent voters said they felt the same way.

“We’re seeing significant stress transcending party lines,” Arthur C. Evans Jr., PhD, the American Psychological Association’s chief executive officer, said in a statement. “The uncertainty and unpredictability tied to the future of our nation is affecting the health and well-being of many Americans in a way that feels unique to this period in recent history.”

Current events are also a cause of stress, according to the poll. While 95 percent of adults said they follow the news regularly, more than half of them said it gives them stress. Two-thirds of those polled said the news often “blows things out of proportion.”

However, the stress has spurred some people into action. The poll found that around half of the country has volunteered in response to the state of the nation, and 28 percent have signed a petition.

The American Psychological Association surveyed 3,440 adults online from Aug. 2 to Aug. 31 to compile their results.

You can read more about the American Psychological Association’s poll here.