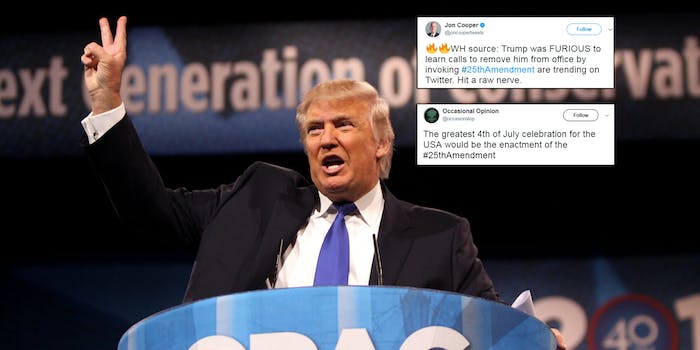 Trump's favorite social network is being used against him.

President Donald Trump’s Twitter account has been busy in recent days—most notably as the megaphone for his attacks on media outlets and sexist remarks about particular show hosts.

But his favorite social media platform is also full of people who aren’t very pleased with his actions in office. Two hashtags, #25thAmendementNow and #25thAmendment, rocketed up the list of trending topics on Sunday and the frenzy poured over into Monday morning, reportedly making Trump “furious.”

🔥🔥WH source: Trump was FURIOUS to learn calls to remove him from office by invoking #25thAmendment are trending on Twitter. Hit a raw nerve.

There’s good reason Trump would be furious about people tweeting about the 25th Amendment—it’s calling for him to be kicked out of office.

Many Trump critics have viewed his recent activity on Twitter as evidence that he is not mentally fit to serve as president.

Calls for Trump’s impeachment have been a steady drumbeat for weeks, particularly in light of his firing of former FBI Director James Comey amid the agency’s investigation into Russian ties with his campaign and interference in the election.

While impeachment is an unlikely outcome of Trump’s presidency considering the current makeup of Congress, that hasn’t stopped betting websites from trying to predict the likeliness of his presidency ending early.

The newest call for impeachment followed his tweet about CNN, using a GIF of him body slamming someone during is WWE days with the news station’s logo superimposed on the person’s body. Many people interpreted the tweet as encouraging violence against the media.

Here’s a look at some of the #25thAmendementNow and #25thAmendment chatter on Twitter.

Dear World, Please don't judge us by the madman who's taken over our highest office. We'll fix this. Sincerely, -America #25thAmendment