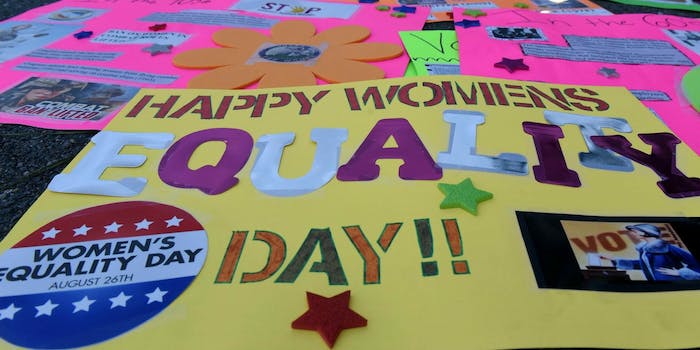 How should we celebrate Women’s Equality Day in 2018?

Women’s Equality Day—slated for Aug. 26—has its origins in equal voting rights. So what kind of equality should we hope for?

At a time when everyone associated with the White House seem hell-bent on rolling back whatever markers of gender parity we may consider achievements? The right to a degree of uterine autonomy? Extremely imperiled. The idea that you might be able to openly love whomever you choose, without others legally sanctioned to discriminate against you? Bye. The right to use the nearest available bathroom? Nope, sorry. I for one am not feeling the most confident about the status of constitutionally endowed equality for anyone who isn’t a straight, cisgender white man.

But actually, Women’s Equality Day—slated for Sunday, August 26—has its origins in eerily similar sentiments. So this year, renewing the call for national equality may be worthwhile.

What is Women’s Equality Day?

In 1971, thanks in large part to feminist activist and New York Rep. Bella Abzug, Congress officially designated August 26 Women’s Equality Day. August 26 marks the anniversary of the 19th Amendment’s certification, or the moment women gained the right to vote. Fueled by the Civil Rights movement, the late ’60s and early ’70s birthed the women’s liberation movement. It was a brand of feminism that emphasized equality at work, in the home, and in terms of reproductive rights.

In 1970, on the 50th anniversary of women’s suffrage, the Women’s Strike for Equality March flooded New York City’s Fifth Avenue. 50,000 women went on strike and kicked off coordinated actions nationwide. Demonstrators demanded access to abortion, equal pay, professional opportunity, and round-the-clock childcare. They demanded, in effect, not only to be treated as equal members of society, but the creation of programs that would allow them full access to classically male power systems.

Any march for equal rights, however, comes with a clear implication: The group hitting the streets doesn’t currently have them. Despite its continual reintroduction from 1923 throughout the mid-20th century, the Equal Rights Amendment (ERA) didn’t gain Congressional approval until 1972 and didn’t become part of the Constitution for another decade.

Calling out a specific day to celebrate women’s equality, a concept the government had yet to formally recognize, was partially political strategy, Katherine Turk, an associate professor of history and adjunct assistant professor of women’s and gender studies at the University of North Carolina, tells the Daily Dot.

“In marking [Women’s Equality Day], you’re sort of compelled to think, ‘Well, do women have equality?’” Turk tells the Daily Dot. This is precisely what Abzug and her colleagues sought to highlight. Women don’t have equality. Securing equality would mean passing the ERA and making meaningful changes to American culture. Women’s Equality Day offered a way to commemorate the 19th Amendment, “but also a way to suggest an ongoing agenda.”

The problem with the 19th Amendment

Although the 19th Amendment did grant U.S. women a sliver of personal agency, it extended only to the polls. It’s one of the most substantial accomplishments for feminists of the 19th and 20th centuries. Still, it failed to grant all women an equal stake in the world. White women profited off of racism, and that fact is baked into the 19th Amendment’s history.

For that, we have the bill’s language —and some white suffragists’ single-mindedness—to blame. The 19th Amendment reads, “The right of citizens of the United States to vote shall not be denied or abridged by the United States or by any State on account of sex.” This doesn’t say anything about race. You might think the 15th Amendment patches the hole, and for some Black women, it did. But another set of post-war policies complicates that notion: Jim Crow.

“For the vast majority of African American women in Southern states, who already lived under a pretty repressive regime of Jim Crow voter suppression, the 19th Amendment was not written in such a way that would help them or extend to them,” Turk explains. It did not supersede Jim Crow. Therefore, for Black women whose state election procedures barred their husbands and brothers and fathers from voting, the 19th Amendment held no promise. Indeed, these women had to wait on the 1965 Voting Rights Act, which wasn’t amended to enfranchize non-English speakers until 1975. In many areas, women’s equality meant white women’s equality with white men.

What about the 15th Amendment?

As we prepare to commemorate its 98th anniversary this year, it’s worth noting the history of both amendments. Especially under an administration that is slowly walking the country back to a time when white men were the only ones eligible for basic rights.

Reformers began advocating for suffrage as early as the 1820s, before the Civil War. And at least initially, the suffragist and abolitionist movements intersected. The Seneca Falls Convention in 1848, for example, saw Frederick Douglass join Elizabeth Cady Stanton in arguing passionately for women’s right to participate in elections. But the end of slavery in 1865 forced white suffragists to put their money where their mouths were, revealing cracks in that foundation.

The prospect of a 15th Amendment, which granted Black men the right to vote, divided suffragists’ opinions. The amendment reads: “The right of citizens of the United States to vote shall not be denied or abridged by the United States or by any State on account of race, color, or previous condition of servitude.” Some, like Stanton and Susan B. Anthony, rejected the idea that Black men would get to the ballot box first. In Anthony’s case, it may have been Black people period: “I will cut off this right arm of mine before I will ever work or demand the ballot for the Negro and not the woman,” as she infamously summarized her position on the matter.

“The 19th amendment could’ve been a moment where black and white women were enfranchised together,” Turk says. “They deploy[ed] some pretty racist and xenophobic tropes in trying to make those arguments, pulling from the idea that white women are morally pure. They can perform a sort of public housekeeping duty and form a kind of solidarity with white men by defining themselves against women of color and against Black men.”

What to do for Women’s Equality Day 2018

The single largest action slated for Women’s Equality Day 2018 is the Unite for Justice National Day of Action. It is a campaign coordinated by NARAL Pro-Choice America, MoveOn.org, the People’s Defense Coalition, and dozens of other organizations that hold an active interest in halting federal judge Brett Kavanaugh’s nomination to the U.S. Supreme Court.

Demonstrations will focus on reproductive justice, immigrant rights, LGBTQ rights, environmental protections, and workers’ rights. To find an event near you, visit their website for a comprehensive list of local protests.

Nearly 100 years after the push for women’s equality realized its first major achievement, we still don’t stand on the same footing as men. Those racial, class, and language barriers that stratified the allocation of basic rights still exist. Despite a series of setbacks over the past year and a half, we’ve still made meaningful gains. So make sure the president doesn’t rip those away too: Show up on Women’s Equality Day and indulge in a little public screaming. At the very least, it should be cathartic.