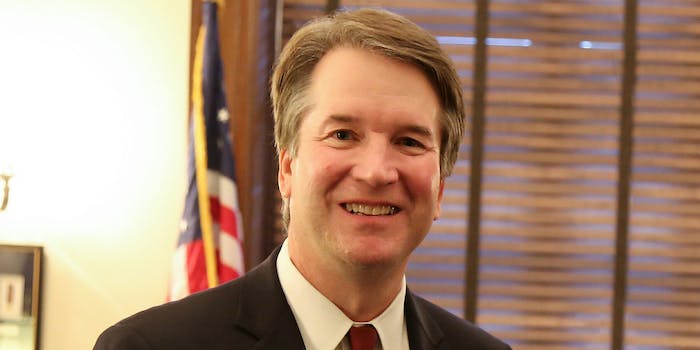 Trump and his SCOTUS pick have already made their intentions clear.

On Monday night, a national audience gathered to watch the president’s primetime, reality TV-style reveal that will likely decide the fate of uterus-havers for generations to come: Donald Trump’s nomination to fill the Supreme Court vacancy left by moderate Justice Anthony Kennedy, the bench’s longtime swing vote and soon-to-be retiree.

Based on a promise Trump made on the campaign trail—that he would purposefully appoint justices hostile to Roe v. Wade, the landmark case that legalized abortion nationwide, if given the opportunity—viewers had reason to worry. Not only does it rankle that the country’s leader would treat his constituents’ bodily autonomy as fodder for a media circus, but his ultimate pick, conservative D.C. Circuit Judge Brett Kavanaugh, has an ominous track record on abortion rights.

True, Kavanaugh hasn’t directly addressed Roe in many of his opinions. In the appointment hearing for his current position, he promised to “follow Roe v. Wade faithfully and fully” because it’s “been reaffirmed many times” by the Supreme Court. As a federal judge, Kavanaugh has an obligation to adhere to SCOTUS’ rulings. As a justice on that same bench, though, his old rules no longer apply.

“Historically and for good reason, we expect the Supreme Court to respect its precedent: That is important to the continuity of law,” says Kelli Garcia, director of Reproductive Justice Initiatives at the National Women’s Law Center. However, she adds, “The Supreme Court can overturn its own precedent.” And with respect to Roe, that’s exactly what abortions rights proponents worry may happen—and soon.

Brett Kavanaugh's record as a judge and lawyer is clear: hostile to health care for millions, opposed to the CFPB & corporate accountability, thinks Presidents like Trump are above the law – and conservatives are confident that he would overturn Roe v. Wade. I'll be voting no.

You may remember Kavanaugh’s name from the legal controversy surrounding Garza v. Hargan, or, that time the Trump administration tried to block an immigrant—Jane Doe, who also happened to be a minor—from obtaining an abortion in Texas. The Lone Star State requires underage abortion seekers to secure either parental consent or permission from a judge before they can legally terminate a pregnancy, on top of its 20-week ban and 24-hour waiting period between initial appointment and procedure. The Trump administration refused to let Doe visit an abortion provider while she was in the government’s custody (Doe was held at a Texas detention center), sending her instead to a religiously motivated “crisis pregnancy center” they likely hoped would sway her away from termination. The American Civil Liberties Union took up Doe’s case, and eventually, it landed in front of a D.C. Circuit Court panel—on which Kavanaugh sat.

After reviewing the case, Kavanaugh penned an order agreeing with the administration: Granting that an undocumented minor does have “a constitutional right to obtain an abortion in the United States,” he gave the government two weeks to track down a sponsor for her—a process that typically takes longer than a fortnight—who could allow Doe to get an abortion without the government’s involvement. But by the time Kavanaugh’s clock ran out, Doe would be butting up against Texas’s 20-week deadline. Within days, the full D.C. circuit reversed his order, and Doe quickly terminated her pregnancy.

Kavanaugh, however, disagreed with his colleagues, writing a dissenting opinion that holds dangerous implications for abortion access should the Senate confirm him as Kennedy’s replacement. “The Government has permissible interests in favoring fetal life, protecting the best interests of a minor, and refraining from facilitating abortion,” as long as it does not impose any “undue burden” on the person seeking to end a pregnancy, he wrote. Transferring the minor into a sponsor’s custody did not constitute an undue burden, Kavanaugh said, noting that the government said the search could be completed within the 11-day time frame he’d laid out. And ultimately, the government does not have an obligation to help an undocumented minor get an “abortion on demand,” simply because she wants one.

“In the Jane Doe opinion, Judge Kavanaugh basically said that … for the government to allow Jane Doe to go to her appointment, that would somehow be ‘facilitating’ the abortion, and the government wasn’t required to do that,” says Garcia. That’s dangerous for two reasons, she explains: One, it validates the administration’s view that religious liberties mean third parties—the U.S. government included—can intervene and block someone’s personal health care decisions; and two, it ignores the practical reality of actually getting an abortion.

When you’re trying to terminate, especially in a state as restrictive as Texas, “every week matters,” Garcia stresses. “It both matters because [you] might not be able to get the abortion, and it also matters because every week that you’re carrying an unwanted pregnancy is a violation of your rights.”

Since 1973, Roe has guarded the right for a pregnant person to legally abort up until the fetus reaches viability—usually, around 24 weeks. Subsequent Supreme Court decisions have clarified that deliberately placing hurdles, or “undue burdens,” in abortion-seekers’ way is unconstitutional. Requiring a person whose healthcare falls under Roe’s purview to jump through extra hoops in order to get a time-sensitive procedure could reasonably be expected to “have the practical effect of potentially blocking her from having the abortion at all,” Garcia continues, “and that sends a very troubling message about where [Kavanaugh] stands on Roe v. Wade and on women’s access to abortion generally.”

Putting Brett Kavanaugh on the bench would threaten to bring women back dark days and back alleys. That’s #WhatsAtStake. We must #StopKavanaugh

Again, it’s not necessarily in the court’s best interests to overturn its own precedent, but if a justice who does not feel Roe adheres to the tenets of the Constitution, that decision comes into the line of fire. And if that justice does not see a constitutional conflict in placing certain obstacles between pregnant people and abortion, Roe still lands on shaky ground.

It’s reasonable to fear, Garcia says, “that there will simply be continued chipping away of those protections by potentially allowing these other restrictions that don’t outright ban abortion but essentially make it impossible for women to access abortion care.” And unfortunately, there are a few of those cases coming down the pipeline.

Brett Kavanaugh's record indicates that he would be among the most conservative justices in Supreme Court history, his views are far outside the mainstream and there’s every reason to believe he would overturn Roe v. Wade. #WhatsAtStake pic.twitter.com/ILkkf4twk4

Arguably the most pressing challenge to Roe comes in the form of a six-week abortion ban recently enacted in Iowa, a measure anti-abortion backers anticipated would spark a significant legal challenge. According to this new law, abortion becomes illegal when a fetal “heartbeat”—for reference, fetuses don’t actually have hearts this early on in gestation—can be detected on a sonogram, a moment that often comes well before people have even realized they’re pregnant. In setting such a narrow window to secure the procedure, Iowa sought to effectively ban abortion statewide; the law’s enforcement is on hold, however, while the courts decide its validity. If the Iowa State Supreme Court invokes Roe in its decision, the U.S. Supreme Court could take up the case, throwing abortion’s future into chaos. And so Trump’s opportunity to replace Justice Kennedy, reliably the deciding voice in cases that have safeguarded abortion access, with someone far more conservative comes at a truly terrible time.

Kavanaugh still needs Senate approval to take his spot on the bench: With Sen. John McCain receiving cancer treatment in Arizona, the margins are tight: Republicans currently occupy 50 seats and the Democrats, 49. Some anxious onlookers hope Republican Sens. Susan Collins (Maine) and Lisa Murkowski (Alaska) will do as they’ve done in the past and vote against their party to tank a threat to women’s health. Even if they do, universal Democratic opposition isn’t guaranteed; also, Collins has been cagey. Before Trump made his announcement, she vowed not to vote yes on a nominee who “demonstrated hostility to Roe v. Wade”—“demonstrated” being the operative word. The thing is, no would-be justice would sit in a Senate hearing and express a personal agenda to tear down a standing decision. Overwhelmingly likely, Kavanaugh will express respect for judicial precedent. But if Collins needs proof of his abortion-related perspective, she need look no further than Garza v. Hargan.

Whomever Trump picked, though, the situation would have ended up the same: His intention to appoint a justice who will overturn Roe v. Wade was set from the beginning, and each of the candidates on his list underwent vetting by conservative groups to ensure they ticked the requisite boxes. Senators like Collins should trust that he and the abortion-phobic organizations that vetted his candidates will do their due diligence. And with respect to Kavanaugh specifically, he’s made his leanings clear.

“I don’t think you have to necessarily read between the lines,” Garcia says. “The Jane Doe decision, his opinion in that case, is a pretty clear indicator that he’s not committed to respecting the values and rights that are integral to Roe v. Wade.”