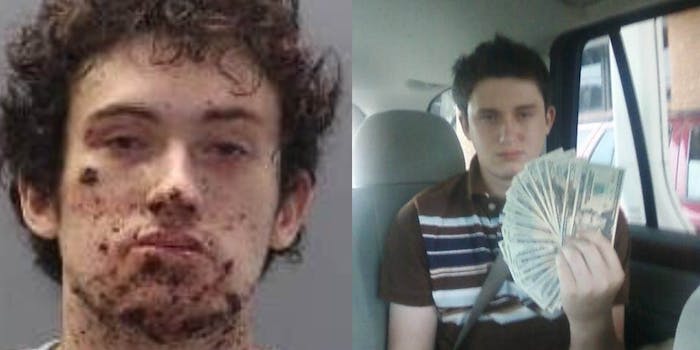 Investigators found 'a skin colored chunk believed to be flesh' in a bedroom at his home.

The FBI believes a 23-year-old Virginia man accidentally amputated his own hand while making an explosive device designed to kill “hot cheerleaders.”

According to local media reports, the culprit, Cole Carini, went to a Virginia hospital on Tuesday. He arrived with one hand missing, several fingers amputated, and shrapnel wounds to his neck and throat.

Carini told police his injuries were due to a lawnmower incident.

According to court records, however, the grass at his house showed no evidence of mowing. The blades ran six inches tall.

Carini has a juvenile record for explosives violations. He had been on probation until September 2019, according to court records.

“When asked if he remembered what happened to put him in hospital,” authorities wrote, “Carini told the [FBI] Agents that he was mowing his yard and the mower flipped over in such a way that it [dragged] his hands into the blades and because the blades were spinning so fast it acted like a bomb.”

When FBI agents searched his house, they discovered drops of blood leading from a car outside to a second-floor bedroom. In addition, “a piece of human skin” and “a skin colored chunk believed to be flesh,” were in the room.

When investigators obtained a search warrant to a shed behind his home, they say they found a crumpled letter that discussed a suicide bomber walking through a shopping mall while concealing “deadly objects” to target a “stage of hot cheerleaders.” According to BuzzFeed News, he seems to be an incel.

When confronted, Carini denied owning explosives and reiterated that his injuries were due to a lawn mowing incident.

According to BuzzFeed News, he currently faces one charge of lying to FBI agents. He’s held at the Western Virginia Regional Jail.

When BuzzFeed News reached out for comment through Facebook, his brother, Neil Carini said, “My family is trusting in God and Godly people. Please pray for my brother. Thank you.”