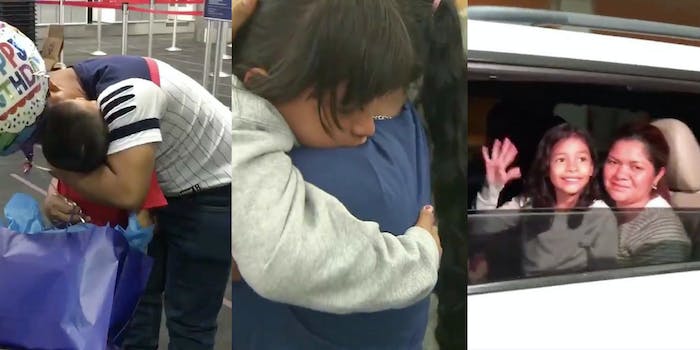 These viral moments are bittersweet and gut-punching.

After months of separation under the Trump administration’s now-terminated “zero tolerance” policy, immigrant families are finally being reunited. But while the latest reunification between a father and son might be moving the internet to tears, it’s also raising a lot of questions about the trauma endured by these separated children.

On Sunday, Los Angeles Times staff writer Esmerelda Bermudez shared a video of the reunification of a Guatemalan asylum seeker Hermelindo Che Coc and his 6-year-old son Jefferson. After nearly two months of separation after crossing into the U.S., Che Coc waited for his son at the LAX airport with a “Happy Birthday” balloon and gift bag in hand—in it, a soccer ball to celebrate Jefferson’s upcoming seventh birthday—Bermudez reported.

Hermelindo waits down a long corridor to finally reunite with his 6-year-old soon, Jefferson. “He’s the love of my life, my hero,” he said. pic.twitter.com/ZJMtvk7V1z

As Che Coc approached Jefferson, he wiped away tears and stifled cries before embracing his son tightly, crying into his neck, and picking him up. He continued to cry as he carried Jefferson, who did not make the effort to hug his father back. When he saw Che Coc, Jefferson, just having gotten off a flight from New York, looked stoic, perhaps not unemotional but not moved at the sight of his father. Bermudez reported that Jefferson’s “vacant look” was joined by a cough, a bruise on his eye, and rashes across his body.

Tonight, Guatemalan asylum seeker Hermelindo Che Coc was reunited w/ his 6-yr-old son, Jefferson at LAX. The two were separated at the border, didn’t see each other nearly 2 months. The boy had a vacant look in his eyes. Also a cough, bruise on his eye & rashes all over his body. pic.twitter.com/322p9WiIBr

The moment Hermelindo & his son saw each other. Jefferson stopped down a corridor, several feet from his father. He stared at the floor. When he looked up, his eyes were vacant. He didn’t reach for Che Coc, didn’t lift his arms to hug him. “Papa,” Hermelindo cried. “Papa.” pic.twitter.com/EtcCl4Kq29

On Twitter, Bermudez shared that she and her reporting team spent the evening with Che Coc before he picked up his son. The father had bought his son new clothes, mopped the floors, and cooked him chicken soup. But preparations and gifts aside, it appeared that Jefferson had a difficult time adjusting. Bermudez reported that he fell asleep on the car ride home, but that his body jolted every few minutes, appearing scared. “I’m here,” his father would whisper to comfort him.

The Che Coc family’s video is the latest reunification to go viral in the past few weeks, following Trump’s executive order stating the administration would stop separating children from parents under its “zero tolerance” policy it enacted earlier this year. Under the policy, all people 18 and older entering the U.S. unauthorized were to be prosecuted for their entry and detained until their prosecution. As a result, Customs and Border Protection (CBP) agents would separate children from the parents on the path to prosecution, often without warning or sometimes without explaining to the families what is happening.

“Forgive me for leaving you all alone,” Gonzalez-Garcia cried into her daughter’s hair. “Forgive me, my daughter. Forgive me.”

And even then, Gonzalez-Garcia’s daughter also appeared muted, though she did kneel with her mother, stroke her hair, and pat her legs—all attempts to console her mother in the few ways an 8-year-old knows how.

This baby looks like she has seen and been through some things. My God… https://t.co/3JxIW5VunO

After a child’s separation during the policy, CBP considered the child to be an “unaccompanied alien minor and put them in the custody of the Office of Refugee Resettlement under the U.S. Department of Health and Human Services (HHS). There, the children would either be found a sponsor to live with, typically a family member already living in the U.S., or would place the child in a child detention center.

After Trump’s executive order to stop separating families, however, it was unclear what would happen to the between 2,000 and 3,000 children already separated from their families, including how the government would go about reuniting them with their parents. After a federal judge gave the administration 30 days last month to reunify all families, and another judge struck down the Justice Department’s request to alter an agreement that put a limit on how often children can be kept in detention, publications reported that the administration said it would begin to release prosecuted immigrants with ankle monitors, so that families could be reunited and still monitor the parents to show up for their court date.

But the reunification is far more complicated than just being released from immigrant detention. In order to have their children released to them by HHS, immigrants must find a stable residence to house the child and also pay for their travel and the travel of their children to be reunited from where they’ve been relocated. For Che Coc and Jefferson, the two were detained near El Paso, while the 6-year-old was moved to a child detention center in New York, Bermudez reported. Gonzalez-Garcia was transferred to a detention center in Colorado, while her daughter was at a center in Texas.

On Monday, the judge who issued the reunification deadline granted the American Civil Liberties Union a restraining order to stop the Trump administration from deporting families right after reunification.

NEW: The @ACLU wants a restraining order on the Trump admin to stop them from deporting families right after they reunify them, without due process. Judge Sabraw grants them a temporary stay preventing the deportations while the gov files a brief opposing that request.

Given the stressors that families face from immigration custody through reunification—separation, infrequent contact, isolation in a country they’ve never navigated on their own, and even being forced to make their own cases in immigration court—it’s not surprising why the children of immigrants such as Gonzalez-Garcia and Che Coc act as they do. Muted, still, unfazed.

According to the Los Angeles Times, research shows that “separating kids from their parents is detrimental to their physical and mental health.” Children who have the “stress-buffering effect” of a parent taken away become “hypervigilant to threats,” Columbia University psychology professor Nim Tottenham told the publication. They become vulnerable to internalizing depression and anxiety and externalizing problems, such as exhibiting substance abuse and impulse control. These effects stretch between generations, too, and are thought to contribute to chronic health problems.

Children previously observed during separation were seen to exhibit patterns of “protest, despair, and detachment,” with children seeming “aloof and avoid[ing] the parents’ efforts to comfort and cuddle” after being reunited. Much like how Gonzalez-Garcia’s and Che Coc’s children appeared.

Other recorded reunifications follow similarly, with an excited or emotional parent, and a despondent child.

Not all reunifications appear strained, however. In June, ProPublica published an audio recording taken from inside a CBP facility, featuring cries from children who had just been separated from their parents. Among those children were 6-year-old Alison Jimena Valencia Madrid from El Salvador, who begged for someone to let her call her aunt to come pick her up, listing a series of numbers she remembered as her aunt’s phone number. Last week, she was reunited with her mother Cindy after a month and two days of separation.

“I threw myself out of bed and fell on my knees. I thanked God that she remembered the number. If not, I don’t know what would have happened to her,” her aunt told the publication after hearing Jimena’s voice.

BREAKING: Remember that audio we published of 6-year-old Alison Jimena Valencia Madrid begging a border agent to call her aunt after they separated her from her mother? Here's video of that little girl being reunited with her mother this morning, after a month and two days. pic.twitter.com/q1plhAHrHQ

In the video, Jimena walks hand-in-hand with her mother and another family member, beaming at the claps and cheers heard off camera. She waves excitedly at cameras as she sits in her mother’s lap in the back seat of a minivan. Her memory may have been the only resource that kept her from “becoming lost in a system that has taken more than 2,300 immigrant children from their parents,” ProPublica wrote at the time her audio recording went viral.