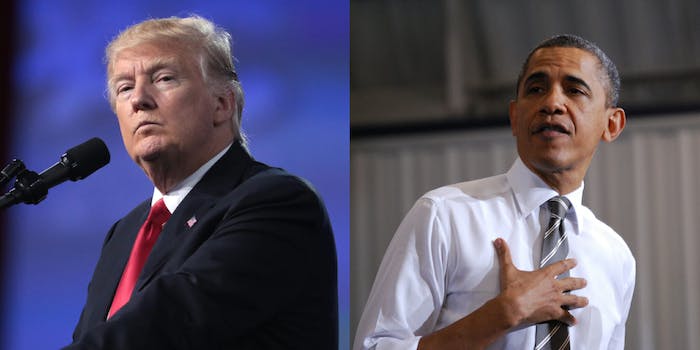 Why Obama is getting blamed for Trump’s border policies

Obama did start some practices that Trump is continuing.

If you’ve been on social media in recent days, you’ve probably seen this phrase posted in exasperated response to the terrifying news of President Donald Trump’s immigration policies. However, many on the right have been quick to point out that some of the laws being enforced have been on the books since before he took office.

Great read. Trump administration & Republicans are getting blamed for immigration policies that existed under Clinton & Obama. The kids in cages pictures going viral happened under Obama. At least be factual. Thx @KMCRadio https://t.co/nAF40NGgai

But when Obama started this program and actually put children in cages… You never said a word!

“The voices most loudly criticizing the enforcement of our current laws are those whose policies created this crisis.”

Part of figuring out if this is “who we are,” is figuring out just how much Trump is departing from established laws and enforcement policies.

The broad truth is that while the immigration laws on the books have allowed for the current situation, President Trump is pursuing these policies with an aggressive breadth and depth unlike any of his predecessors.

These policies had the stated goal of deterring immigrants from crossing the border, and that is one way the Obama administration measured success.

By all accounts, the separation of parents from children under Trump has been conducted more aggressively and with far less discretion than previous presidents. In her briefing yesterday, Nielsen admitted that their numbers were higher than previous administrations.

“The Obama administration all separated families at the border, their rate was less than ours, but this is not new.”

This disparity betrays a key difference in policy execution. There is no law that says children must be taken from the parents of illegal aliens. And though it has happened under previous administrations. This spike is the result of a “zero tolerance” created by the president in April at the encouragement of senior adviser Stephen Miller.

It appears that this enforcement is being conducted without much nuance or care. For example, some immigrants and their lawyers are reporting that they are being separated from their children during routine activities like bathing without any warning, and that some immigrants are being deported while their children remain in American custody. This sort of wanton, callous enforcement was not the case under Obama.

If you look at Obama–era enforcement practices, you will find exceptions made for humanitarian reasons. You can find instances where the Obama administration released immigrant mothers, and of course, the DREAM Act was meant to protect immigrant children.

However, not even zero tolerance policies are new. President George W. Bush crafted a “zero tolerance” immigration policy of his own. “Operation Streamline” was a program that referred all unlawful entrants to the United States for criminal prosecution. However, under this version of zero tolerance, exceptions were made for adults traveling with minors, juveniles, and the sick.

Once Trump took office, discussions began of bringing back Operation Streamline, but with none of the humane limitations placed on the program by Bush. So, in a sense, Trump’s policy is more “zero tolerance” than previous “zero tolerance” of Republican administrations.

The particular cruelty of these policies has not gone unnoticed by the rest of the world. On Monday, the UN’s high commissioner for human rights, Zeid Ra’ad al-Hussein, called on the United States to end these immigration practices, saying, “the thought that any state would seek to deter parents by inflicting such abuse on children is unconscionable.”

There is also a huge moral gap between Trump and his predecessor in the way that children are being detained. Trump’s zero tolerance policy has resulted in the mass detention of children in facilities that are in no way equipped to house them.

The reports that flooded the media over the weekend were heart-wrenching. Children are being held in warehouses outfitted with cages. They are given foil sheets for use as blankets. Teenagers are changing diapers and caring for confused, crying young children.

Some of these detention centers are just converted Walmarts outfitted with wire cages.

These solutions likely won’t be enough to handle full enforcement of Trump’s zero tolerance policy. There is talk of creating tent cities on Army bases to house the influx of immigrants the administration plans on taking into custody.

By contrast, during an immigration spike under Obama, after some consideration, new facilities were opened along the border that allowed women and young children to be held together. So many facilities were built that it became an attractive business for contractors. In 2015, one private prison company boasted a nearly $50 million increase in profits thanks to a detention center contract. However, these facilities were not constructed by converting abandoned retail spaces or erecting tent cities.

These were by no means perfect facilities. Also in 2015, the ACLU brought a class-action lawsuit against Border Patrol facilities in Arizona. The organization alleged that detainees were being held in unsanitary conditions and were often denied food, water, and medical attention. The lawsuit also criticized detainees’ lack of access to council.

While the letter of the law existed under previous administrations, the tone of enforcement has been very different under Trump. For example, ICE spokesperson Gillian Christensen told Frontline in 2011, “our agency does work with individuals in removal proceedings to ensure they have ample opportunity to make important decisions regarding the care and custody of their children.”

She then pointed to a 2010 directive that “ICE will typically not detain individuals who are the primary caretakers of children, unless they are legally subject to mandatory detention based on the severity of their criminal history or their risk of flight.

That doesn’t mean Obama administration detention policies never ran afoul of the law. In 2015, a federal judge ordered the Obama administration to cease the detention of asylum-seeking families. In 2016, a judge ruled that detainees must be released within 20 days. Prior to that ruling, some immigrants were being held indefinitely.

The glimpses of humanity in Obama’s policies by no means negate the deportation apparatus that he expanded or excuse the abuses immigrants suffered under that system. But, again, it is distinct from the zero tolerance Trump policy.

Is this who we are?

In some senses, this is who we are. The Trump Administration is using existing immigration laws and the escalation of previous enforcement policies to justify their current program. President Obama was tough on immigration, and during his presidency, he expanded the country’s immigration enforcement apparatus.

However, this doesn’t change the fact that Trump and his advisers have concocted an immigration protocol that is far less humane than that of their predecessors. It is clear that even they know this. This is why administration officials like Nielsen, Attorney General Jeff Sessions, and the president himself have been so busy attempting to deny, justify, and shift blame for their policies.

This secretive and shamed attitude trickles down to rank and file Border Patrol and ICE officials. Reporters and politicians have reported that access to these detention centers has been restricted, interviews are not allowed, and the windows are being covered so observers can’t see inside. This is yet another departure from Obama era policy.

Is this who we are? Yes. But, that doesn’t mean we aren’t getting worse.