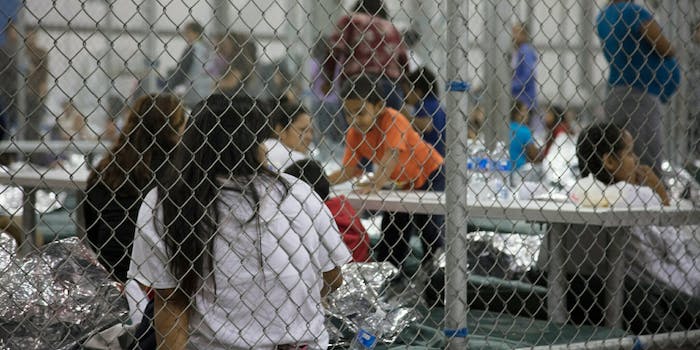 Its 'catch and release' policy returns, and the internet has some feelings about it.

The Trump administration is releasing migrant parents, fitting them with ankle bracelet trackers and reuniting families after a federal judge rejected its request to allow children to be held in detention indefinitely.

Not getting the extension for child detention that it originally requested, and under a 20-day deadline issued by a federal judge last month, the Trump administration has stated it would release immigrant families currently in detention under its “zero tolerance” policy, the New York Times reported. Because of the restrictions, the Trump administration has also stopped referring adult immigrants for prosecution.

“Parents with children under the age of 5 are being reunited with their children and then released and enrolled into an alternative detention program,” Matthew Albence, Immigration and Customs Enforcement (ICE) executive associate director of enforcement and removal operations, said Tuesday.

The administration’s zero-tolerance policy, implemented in May, set off international outcry as hundreds of families were separated in order to detain adults for prosecution, leaving kids, some as young as infants, to be placed in child detention centers or with sponsors by the Office of Refugee Resettlement. In responding to the country’s call to stop separating families, President Donald Trump signed an executive order that stated the administration would end the separations. The Department of Justice (DOJ) then argued that it needed to amend the 1997 Flores agreement, which allowed a max of 20 days for government child detention and required the child to be turned over to a licensed care program after, in order to keep families together—just in detention.

However, on Monday, Judge Dolly M. Gee of the Federal District Court in Los Angeles ruled that the DOJ had no reason to change the settlement, stating it was a “cynical attempt” to make the courts develop immigration policies after “over 20 years of congressional inaction and ill-considered executive action,” the Times originally reported.

Additionally, the Trump administration struggled to meet Tuesday’s 20-day deadline to reunite all families with children under 5 years old, issued by San Diego Federal District Court Judge Dana Sabraw last month. Of the 102 children eligible under this deadline, only a third had been reunited with parents. The administration was also given a 30-day deadline to reunite all immigrant children separated from their parents, the July 26 date just more than two weeks away.

The judgement marks the return of the Trump administration’s “catch and release” practice, allowing immigrants facing prosecution to exist in the U.S. without being detained.

While online audiences to the policy change supported the ongoing reunifications, many took aim at the term “catch and release” being parroted by the Times, denouncing its comparison of undocumented immigrants to wild animals.

“Hi NYT, Humans aren’t fish/bears/etc. You don’t ‘catch and release’ them. Attribute such phrasing that refers to human beings as if they’re hunted animal,” Nicole Hernandez, an NPR editor, tweeted.

Hi NYT,
Humans aren’t fish/bears/etc. You don’t “catch and release” them. Attribute such phrasing that refers to human beings as if they’re hunted animals. https://t.co/Y4Ux6FpKwS

“Glad rule of law is on the side of humanitarian concerns! But the term #catchAndRelease bugs me! As it continues the degrading of humans to animal status!” actor John Leguizamo wrote.

Glad rule of law is on the side of humanitarian concerns! But the term #catchAndRelease bugs me! As it continues the degrading of humans to animal status! https://t.co/VTpMjh5Cp9

Scare quotes or no, “catch and release” is a phrase for animals. Please don’t use it for people. pic.twitter.com/fdgIAD5SIT

This is not ‘Catch and Release,’ it is smart policy called alternatives to detention. https://t.co/gzeGvqP0qS

‘Catch and Release’ is a disgusting phrase that reduces humans to the status of fish. Please don’t use it when straightforward language not created by white supremacists to dehumanize The Browns will do. https://t.co/vFOpGBwVf4

Can we take a sec to reflect on how dehumanizing the phrase and notion of "catch and release" is? https://t.co/QEPe3Dae2q

Despite these changes, the Justice Department says its still upholding its “zero tolerance” policy but isn’t necessarily detaining all who will be prosecuted. ICE will use ankle monitors to track released families, though “other methods” of tracking and ensuring immigrants show up for their court date may be considered. An estimated 80,000 immigrants currently wear tracking devices in the U.S.

The monitors themselves may not last for long, however. The Times reported that Judge Sabraw said he’d consider allowing families to “choose” between “remaining in long-term detention with ICE” or “voluntarily” give their children to the Department of Health and Human Services while they wait to be prosecuted.

A spokesperson for the Department of Homeland Security called the policy shift to ankle monitors a “pull factor for increased future illegal immigration,” but stated that the department would “continue to work with Congress to find a solution to this problem.”