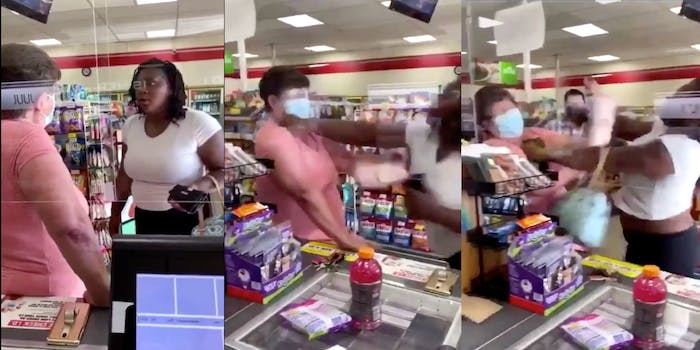 In the video, the two unidentified women are arguing back-and-forth at a 7-Eleven in Sacramento, California. The Black woman says, “All I did was walk past you and you start talking about your Black husband.”

“I don’t give a fuck about your Black husband” the Black woman appears to add. “Just because you suck Black dick doesn’t mean you’re not a racist.”

In a second video, the white woman is sitting on the ground gripping the Black woman’s arm and yelling for someone to call 911. The Black woman repeatedly says, “let me go.”

The white woman was treated for minor injuries and initially chose to not file a complaint, TMZ reports. Although, the next day she called the police and decided to report the altercation.

Despite claims on social media that the Black woman was arrested for assault, the Sacramento County Sheriff’s Office told TMZ that “no suspect has been identified, charged or arrested.”

The sheriff’s office did not immediately respond to The Daily Dot’s request for comment.