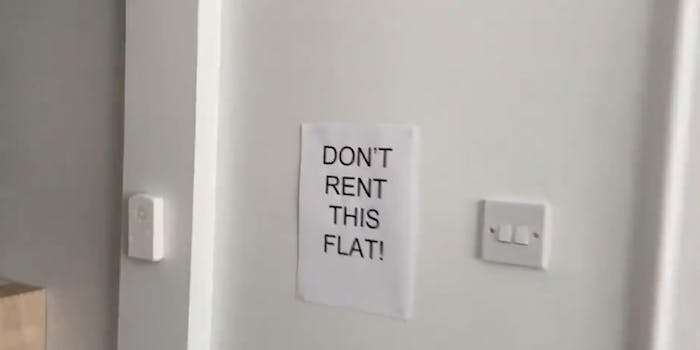 The flat has many charms— er, pests.

After their leasing agent requested a video of their apartment which they are “all but being kicked out of,” Twitter user and filmmaker @SandyBatchelor made sure any future tenants would be highly discouraged from moving in.

Beginning the video by indicating that he’s not wearing much beside his slippers, Batchelor shares his home in a tour highlighting every aspect of the flat.

“This is the living room, all this is coming with us because the fuck comes unfurnished,” Batchelor said in the video. “There’s the bins just outside the living room window, that’s lovely in the summer when it’s hot.”

There are many charming things about the property, like built in shelving and a decorative fireplace.

“Ant bait station because there’s ants, that fireplace doesn’t work, There’s some shelves,” Batchelor said. “The boy who put them in must’ve been drunk when they did it, because there’s about a 30 degree angle in them.”

As Batchelor moves through the apartment, signs reading “DON’T RENT THIS FLAT!” and “YOU WILL HATE IT HERE” are posted throughout. Another reads, “THERE IS A GHOST WHOO”

The back garden, or yard, also has rats, according to Batchelor.

He concludes the video by showing the wardrobe which is going with him when he moves out, which has mirrors on its cabinet doors. In the mirrors, Batchelor’s reflection reveals he has given the tour while wearing a black bra, panties and sunglasses.

Replies to the video are largely about perceived injustice of and by landlords.

“Be quicker is we had a website where we could list the names of landlords who weren’t either useless or bastards,” Twitter user @Tom___Waterman wrote. “Would be about 15 on there.”

Others took the opportunity to share their landlord horror stories.

“We moved out of a house once with a massive damp problem and when we moved our wardrobe there was a massive black mold patch on the wall,” Twitter user @krustyloaf wrote. “The letting agents said ‘well if you will choose to live like that’ wankers.”