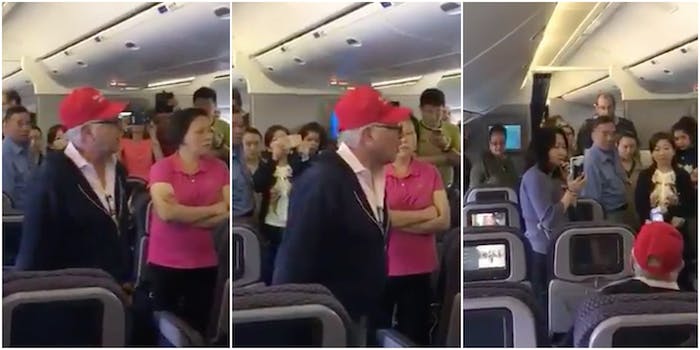 Belligerent Trump supporter kicked off United flight as passengers chant ‘Lock him up!’

It all started after he was denied a seat upgrade.

On Monday, all of America’s most recent hot-button issues collided on an airplane set for New Jersey.

The incident began after United Airlines refused to upgrade the seat of an elderly man. The man, who donned one of President Donald Trump‘s “Make America Great Again” hats, reportedly refused to let anyone sit next to him despite passengers holding tickets for those seats. The man is heard on video saying, “OK, people shut up. I am entitled to that seat.”

The man, who has not been named, began berating his fellow passengers, according to videos of the incident. After the crew of United Flight 187 told him he needed to leave the aircraft, the man called passengers “lesbian” and “Hillary,” and he referred to one passenger as “stupid friend over here that don’t know how to speak English.”

This guy has been delaying my wife's Shanghai to EWR United flt this a.m.. He wants to be dragged off so he can get his 25 million. MAGA hat pic.twitter.com/xWRSmpinpM

The man eventually left the plane voluntarily as the passengers chanted “Lock him up! Lock him up!” One passenger told the Washington Post, “Obviously, the hat provoked some of the stuff.”

According to one passenger’s account, the man’s outburst began after the flight was already delayed an hour. The San Francisco Chronical reports that the plane ultimately left three hours late, which forced it to stop in San Francisco for a crew change due to regulations. The plane landed in Newark seven hours later than expected.

Passengers commended the flight’s crew for their handling of the situation, a stark contrast to earlier incidents on United flights that sparked widespread calls for a boycott of the airline.

“We’re grateful for the patience shown by our customers who endured the disruptive behavior of this passenger, as well as the exceptional poise and professionalism of our flight crew,” United said in a statement.