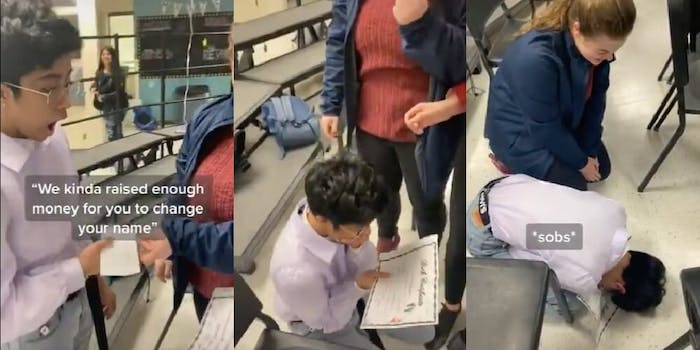 This sweet viral video will definitely make you cry.

The kids are alright!

If you need to find hope in the goodness of future generations, look no further than the friends of Andi Bernabe, a high schooler who just celebrated his 18th birthday.

In a video posted to TikTok (by Bernabe), Bernabe’s friends led him into the school’s choir room, where a bunch of their other friends waited to sing him “Happy Birthday.” If that was the only thing they had done, it would have still been an incredibly sweet gesture, but it didn’t stop there.

Bernabe’s is trans and came out to everyone in his life two years ago. That can be a scary experience no matter who you are, or where you are, but the Texas teen’s friends have been supportive of his journey.

And for his 18th birthday, they wanted to go a little further.

“We kinda have a present. Kinda,” one of his friends said after “Happy Birthday” comes to an end. “So like, since you’re a legal adult, we kinda raised enough money for you to change your name.”

Bernabe immediately collapsed to the floor with his hand over his mouth, clearly blown away by not only the generosity but also the pure support and kindness his friends displayed.

“It just made me feel so happy, overwhelmed, I couldn’t believe it, I really couldn’t,” the teen told Yahoo Lifestyle. “My friends are phenomenal honestly. Since day one it’s just been constant support.”

All said and done, they managed to pull together $300, which is roughly the amount needed for a name change in Texas. The group also made Bernabe a fake birth certificate with his true name on it, and they all signed it in lieu of a birthday card.

“It was overwhelming honestly, I couldn’t believe they actually did it, especially since it’s $300,” he said.

Bernabe plans on waiting a little longer to make his name change official, acknowledging that it’s important to him to be sure of who he is and what he wants. But while he had originally planned to squirrel away what money he could while working a job through college, he now has this incredible gift from people who love him.