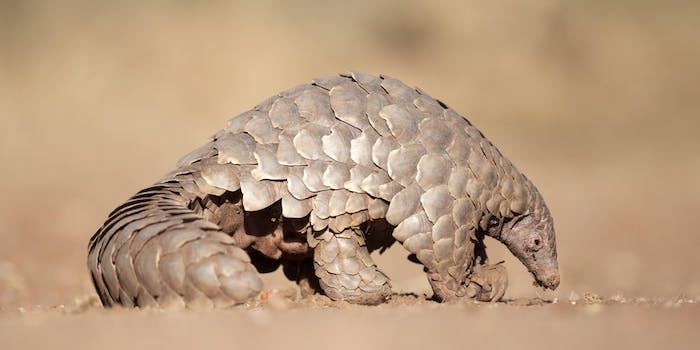 They are an endangered species and can reportedly carry the coronavirus.

Traffickers are selling pangolins, an endangered species, and their parts on Facebook, an investigation by the Tech Transparency Project has revealed.

The Facebook pages, which were published by the Project and first reported on by BuzzFeed News, were not available on Thursday afternoon when the Daily Dot ran a search for them.

One of the pages, created as recently as January, was named “Pangolin Scales for Sale in Vietnam” and listed as a “zoo” on Facebook.

According to screenshots shared by the Project, it openly advertised pangolin scales for sale.

“Tones [sic] of Pangolin scales Available for sale now, contact us for details and videos,” one the post’s description read, along with photos of pangolins and scales.

Another page tried to sell pangolin scales as recently as March 19. It advertised them as a means for becoming rich, stating they “help with…business, luck, love spell.” The since-removed page, which had the username @sandawaanimalsandpangolin, was listed under “Animal Rescue Service,” Health/Beauty,” and “Women’s Health Clinic.”

According to screenshots shared by BuzzFeed News, the description for a page in Vietnam read, “We discreetly sell pangolin sales world wide.”

BuzzFeed News also reviewed another since-removed page, “Rhino Horns and Pangolin scales for sale in China.” “We discretely hunt and sell Rhino Horn and pangolin scales contact us for more information on purchase, WhatsApp me,” read one of the posts, according to the outlet.

The Project uncovered the pages by searching “Pangolin” in Vietnamese on Facebook.

The investigation comes amid reports that pangolins may be coronavirus hosts. Experts suggest they may act as an intermediate host for the virus to travel from bats to humans.

“To stop the transmission of zoonotic diseases in future, the international community needs to stop the illegal wildlife trade,” the United Nations Office on Drugs and Crime said in an April report.

Facebook prohibits “content that coordinates or supports the poaching or selling of endangered species and their parts” and reportedly took down the pages after BuzzFeed News sent it inquiries about them.

“It’s illegal, it’s wrong, and we have teams devoted to stopping activity like this,” it told BuzzFeed News.