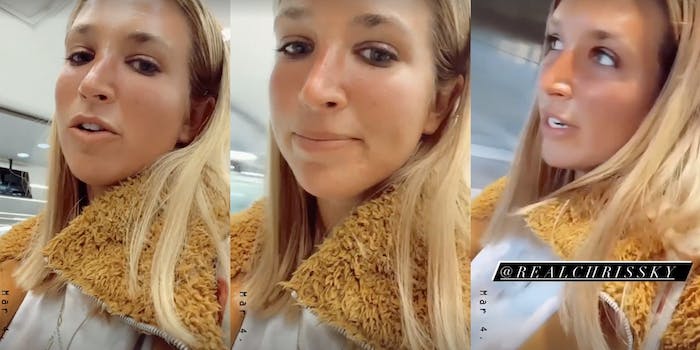 A Canadian nurse is facing backlash after sharing a series of videos in which she refuses to comply with coronavirus safety policies upon returning to her home country.

Jessica Faraone arrived at Toronto Pearson Airport last week after spending a month in Tanzania. After landing, she recorded an Instagram video saying she was refusing to take a coronavirus test or quarantine in a hotel for three days, per current requirements.

“Because I’m a Canadian citizen,” she gave as her reasoning.

She also was not wearing a mask.

Subsequent videos show Faraone arguing with officials about her bothering other people throughout the airport and refusing to cooperate.

“I’m listening,” she told one man who remains off-screen, before immediately interrupting him as he tried to speak to her. “I’m a frontline worker, actually. I’m considered a hero because I’m a registered nurse.”

Faraone also complained that airport officials tried to “shame” her because she’s a nurse and “should know better” about following safety protocols.

“It’s all fucking bullshit,” she said. “We all need to start standing together.”

An Instagram post made by Faraone after the airport incident pushes a conspiracy theory that the coronavirus actually isn’t that dangerous, claiming instead that the restrictions are all about control and purposely keeping people isolated rather than public safety.

“THEY don’t want you to realize how other countries have little to no restrictions and are living normally,” she wrote.

Tanzania, where the nurse spent the last month volunteering at a hospital, has famously refused to report its COVID-19 cases, despite the World Health Organization’s requests. This has allowed for politicians to claim the country is free of the virus, although that is generally believed to be highly unlikely, and the Center for Disease Control has cautioned against traveling to the area.

Faraone’s Instagram videos caused a stir, especially as she repeatedly identified herself as a nurse while spreading potentially harmful misinformation about the coronavirus.

“Mrs. Faraone, who was an RPN and is now an RN, displays offensive behaviours that are unprofessional and that contravene public health measures,” the Registered Nurses’ Association of Ontario said in a statement. “If she is a practising nurse in Ontario, the College of Nurses of Ontario should deal with this matter as they are obligated to do.”

They also criticized her for doing anything to compromise the public’s trust in medical professionals trying “to mitigate the damaged caused by COVID-19.”