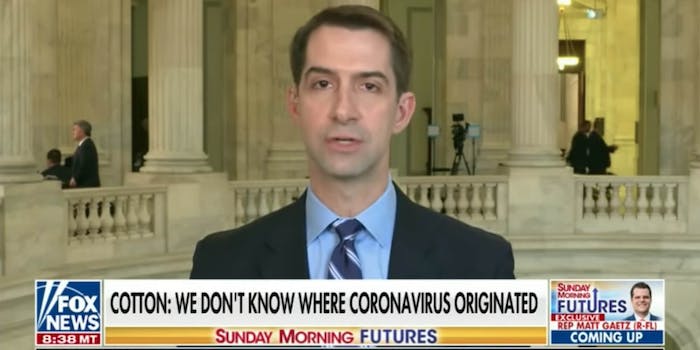 No, the coronavirus did not originate in a lab in Wuhan.

The Republican lawmaker spoke at length on the subject during his slot on Maria Bartiromo’s Sunday Morning Features. He speculated that the outbreak did not start at an open market in Wuhan, but it was instead developed in a so-called “super laboratory” in the same providence–an already debunked conspiracy.

“We don’t know where it originated, and we have to get to the bottom of that,” Cotton said. “We also know that just a few miles away from that food market is China’s only biosafety level 4 super laboratory that researches human infectious diseases.”

While the Centers for Disease Control (CDC) admits it doesn’t quite yet know exactly where the disease started, it is believed to have originated from an animal source.

“Public health officials and partners are working hard to identify the original animal source of the virus that causes COVID-19,” the CDC FAQ on coronavirus reads. “Analysis of the genetic tree of this virus indicates it originated in bats, but whether the virus jumped directly from bats or whether there was an intermediary animal host is not, yet, known.”

This is in direct contraction with the statements Cotton, a repeat conspiracy theorist, peddled on Fox.

Furthermore, the New York Times reports that “experts generally dismiss the idea that it was created by human hands.”

So while the public should be concerned by the deadly outbreak and what caused it, the answer probably doesn’t lie in conspiratorial thought.