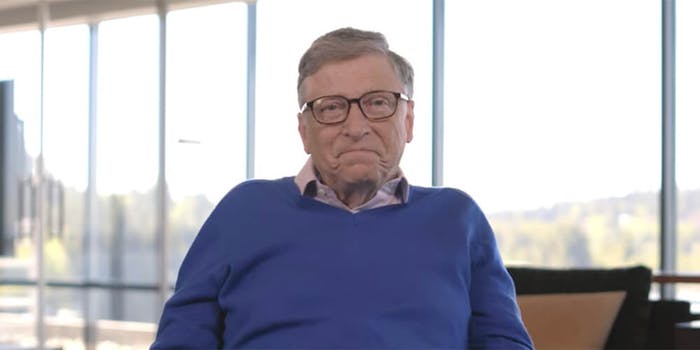 'We always look back and wish we invested more.'

A clip from the Netflix series Explained has led people to believe that Bill Gates—and medical experts—predicted the coronavirus outbreak.

CCN.com, a cryptocurrency blog, pointed out that Gates spoke on the potential for a SARS-like disease in the 2019 episode titled “The Next Pandemic.” Gates also said that new technology might quicken the solution to what used to be a dangerous problem.

“If a disease comes along that we haven’t seen before, typically it would take four or five years to come up with a vaccine against that disease,” Gates says in the documentary. “And new technologies might shorten those times.”

While it’s true that Gates spoke about a possible pandemic, it’s not true, as conspiracy theories have suggested, that he started the coronavirus. Some also believe the Gates foundation ran a simulation expecting coronavirus, but Factcheck.org shows that’s false. Furthermore, Gates has put financial efforts toward fighting the coronavirus outbreak overseas.

Everytime I hear about the #coronaravirus spreading I think about how Bill Gates basically predicted that something like this would happen and that it would kill a lot of people because of how unprepared the world is at handling outbreaks. pic.twitter.com/pfm4tbdDd9

The documentary also discusses China’s wet markets and their potential for spreading disease. Experts believe the coronavirus outbreak began in a seafood market in Wuhan, China, and that the strain might have originated in bats or snakes.

“Unlike markets in much of the West where animals are already dead when they arrive, this wet market sells meat that’s very fresh. It’s killed onsight. That’s what makes it a ‘Disease X’ factory,” the documentary’s narrator says. “Many different animal species are stacked on top of each other, their blood and meat mixed, before being passed from human to human. All the while, their viruses are mixing and mutating, increasing the odds that one finds its way to humans.”

It seems less a matter of predictive programming and more that simply knowing about a potential pandemic isn’t enough to stop a certain virus. The documentary shows experts calling for preventative measures like “universal flu vaccines” that haven’t yet been fully developed.

“When a pandemic comes along of any size, we always look back and wish we invested more,” Gates says. “We are far short of what needs to be done.”

Netflix did not immediately respond to the Daily Dot’s request for comment.