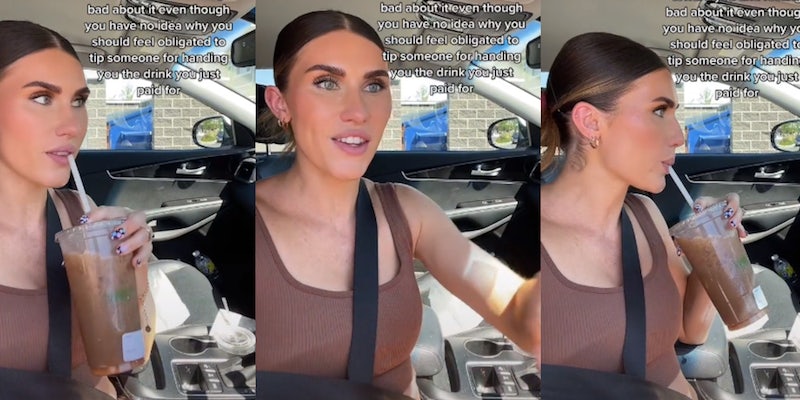 ‘I don’t feel bad. … If they give you a look just stare right back lol’: Customer says she feels bad when she doesn’t tip in drive-thru, sparking debate

'The worst is the drive-thru car wash.'

Americans are sick of tipping—or so it might seem on TikTok. Over the past few months, there have been several videos complaining about feeling an obligation to tip, each one sparking discussion and debate and when and where tipping is appropriate.

One user on TikTok went viral after sharing their opposition to tipping at Crumbl Cookies. Another demonstrated the awkwardness of not tipping while the employee stares at you. Even workers themselves got in on the action, with one cashier at a self-serve frozen yogurt restaurant virally joking about the look she gives customers when they are prompted to tip.

Now, another tipping story has gone viral thanks to TikTok user Chelsea (@chelsea.t_). In a video with over 622,000, Chelsea gives voice to the strange emotions one goes through while tipping for a simple order on an iPad in the drive-thru.

“Discreetly tapping the ‘no tip’ button when the cashier turns the screen toward you and feeling bad about it even though you have no idea why you should feel obligated to tip someone for handing you the drink you just paid for,” Chelsea wrote in the text overlaying the video as she sits in her car with her coffee pretending to select “no tip.”

In the comments section, some users supported the idea that tipping for a seemingly minimal service is an unnecessary burden, offering their own complaints about the process.

“And it’s never just like round up to the next dollar,” wrote one user. “It’s always a tip for what it costs to get the drink…and I’m a good tipper.”

“If you serve me I tip. If I come to the counter/drive thru and pick up myself…why am I going to tip?” asked a third.

“I don’t feel bad. They know it isn’t a job that generally gets tips when they accept the position,” a further user added. “If they give you a look just stare right back lol.”

“The worst is the drive through car wash….” an additional TikToker noted. “Sir am I tipping you for guiding me onto the tracks?”

Others shared their view that tipping was important, regardless of the amount of work perceived to be done.

“If you don’t tip your barista or bartender….sheesh,” shared a commenter. “They’re literally making you something.”

“Coffee shops is the one place I will tip. They literally made the drink too,” stated a second. “That’s what they’re getting tipped for.”

“I tip almost everyone – the people at the ice cream parlor, coffee shops,” claimed another. “Why wouldn’t you not want too? Is the way I feel.”

In comments, Chelsea clarified that she’s a frequent tipper; she just has complaints about the way the system is currently set up.

“I understand [tipping at] restaurants because servers are working for their tips,” she wrote. “But fast food places should pay a fair wage!”

“And if the job isn’t paying them enough then that’s a owner and them problem not a customer paying for product problem,” added another.

We’ve reached out to Chelsea via email.