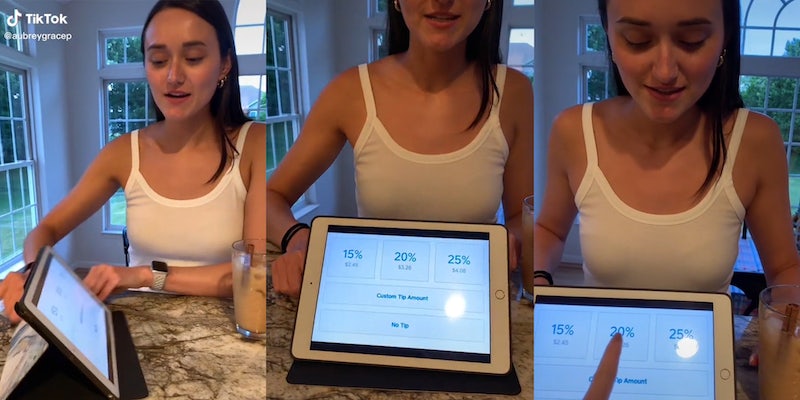 ‘I used to feel so awkward but now I just hit the no tip and walk away’: Viral TikTok about the pressure to tip sparks debate about tipping culture

'I was clothes shopping at a boutique the other day and it asked for a tip! For a shirt I picked out myself!'

A TikToker has sparked debate about tipping etiquette in a now-viral skit about iPad tipping culture, with viewers discussing whether or not tipping prompts on iPad payment software have resulted in a decrease in tips.

In the video posted by TikToker Aubrey Grace (@aubreygracep) on Friday, a woman, who is acting as a cashier, turns an iPad around to show the check-out screen of a popular payment platform. The text overlay reads, “The pressure to tip.”

“The iced chai will be $6.49,” she says. “Insert your card and it will ask you just a few little questions.”

Another woman, who is pretending to be a customer, hesitates as the cashier actively watches her choose between no tip, or the automated 15%, 20%, and 25% tip options. The caption reads, “The awkward moment when they can see what you’re tipping.”

The video has reached over 1.5 million views as of Monday, with commenters discussing whether or not they tip when prompted by iPad check-out software.

“I used to feel so awkward but now I just hit the no tip and walk away,” one user wrote.

“I always tip bc i hate not being tipped,” another said.

“I press no tip as if there’s no other option, like OK have a wonderful day thank you for giving me what I’m paying for,” a third added.

According to Toast, a popular point-of-sale software company, businesses that use their software receive tips on about 60% percent of sales, an increase from just 28% using tip collections methods like a paper receipt or tip jar. Time reports that this could be due to customers feeling “guilty” about pressing “no tip” while in close proximity to the worker completing the transaction.

Other viewers expressed their frustration with the tip prompt when they are making a purchase that didn’t require extra customer service.

“Right. We got froyo yesterday, so you make it yourself and there was still a tip option. Like for??????” one commenter shared.

“Nah cus i be SMASHING that no tip button and staring then right in the eye cus unless they r a server im not tipping u,” another said.

“I was clothes shopping at a boutique the other day and it asked for a tip! For a shirt I picked out myself!” a third added.

However, several customer service workers explained that their income relies heavily on tips, asking customers “not to skip.”

“Unfortunately about 60% of my paycheck is from those tips so it does actually affect us a lot,” one said.

“Baristas at coffee shops usually get paid minimum wage – y’all have no idea how much tips help us pay our bills, we really appreciate it,” another commenter wrote.

The Daily Dot reached out to Aubrey Grace via TikTok comment.