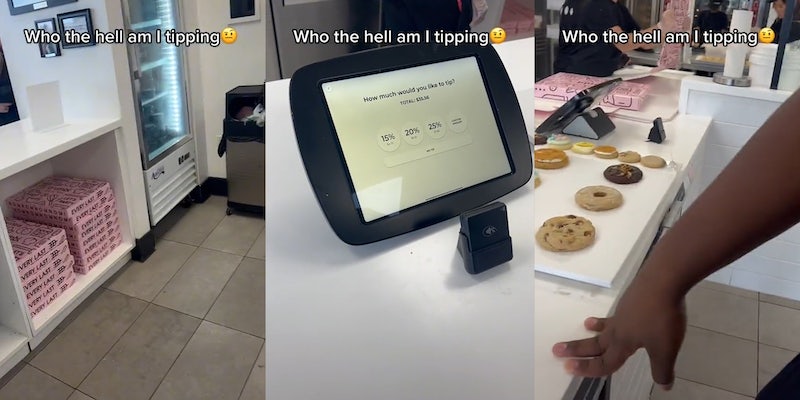 ‘Who the hell am I tipping?’: Customer roasts iPad tipping option while at Crumbl Cookies, sparking debate

'Tipping culture has gotten out of hand.'

A customer criticized Crumbl Cookies for having an iPad tipping option, with viewers in the comments section debating when it’s appropriate to leave a tip.

The video, set to a sound that says “This bitch done lost her rabid-ass mind,” has over 863,000 views. The TikToker, @biggblackpuffa, pans around the Crumbl Cookie location while an iPad in front of them asks if they’d like to leave a 15, 20, or 25% tip.

“Who the hell am I tipping?” the text overlay questions.

The TikToker further mocks a phrase commonly used among workers, saying in the caption: “Its just gonna ask you a question.”

Viewers took aim at “tipping culture” as a whole, alleging it’s “gotten out of hand.” Many claimed they only tip servers.

“I used to work at Crumbl and even I don’t know why people would tip,” one said.

Others defended tipping workers like these and said a tipping prompt at an establishment is not worth complaining about.

“I always see people complain about this but is it that hard to just hit no tip and move on with your life?” a commenter wrote.

“The low paid employees who want a liveable wage,” another said, urging the TikToker to tip.

“I worked at Crumbl and trust me, this is one of the places where workers actually deserve tips,” a third claimed.

According to a review on Indeed, a former worker argued that the tips make the workload a little more worth it. “It was very fast paced since the store was busy most of the time, however, that meant we got decent tips,” they wrote. According to Indeed, the average pay for a Crumbl Cookies worker in the U.S. is just under $13. Several reviews indicate the workers are responsible for baking and decorating the cookies themselves.

The Daily Dot regretfully covered this TikTok twice. Our later coverage is here.

The Daily Dot has reached out to Crumbl Cookies via email and to @biggblackpuffa via TikTok comment.