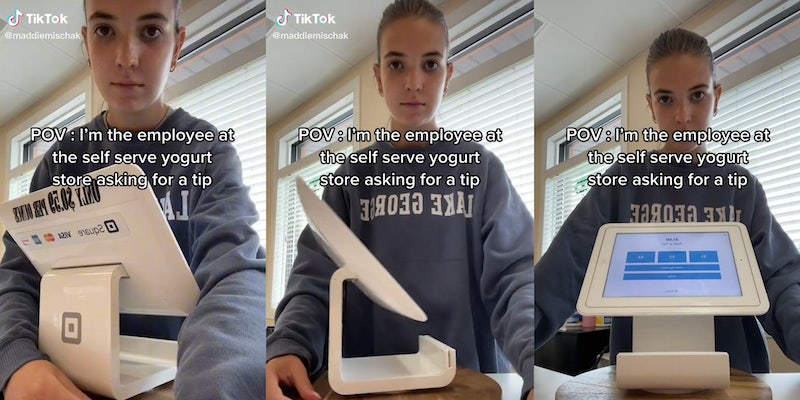 ‘I wouldn’t tip me either guys it’s okay’: Yogurt shop worker puts self on blast for iPad tipping at self-serve establishment

'I will dead stare back and leave no tip if it’s a self-serve.'

Tipping culture is omnipresent in the United States, and for a valid reason. While the federal minimum wage is $7.25 per hour, the federal tipped minimum wage is just $2.13 per hour, with businesses counting on customers’ generosity to make up the discrepancy (note that employers must make up this gap if the tipped employee’s final wages come out to less than the minimum wage, per the U.S. Department of Labor).

However, tipping does not come without controversy. Many people were confused about how much they should tip, or if they should tip at all, for the pick-up orders that became ubiquitous as COVID overtook America, as noted by USA Today.

Furthermore, many Americans are often confused about how tipping works for direct service jobs, like house cleaning and barbers. In some cases, people can’t seem to wrap their heads around tipping.

Still, this has not stopped some self-serve frozen yogurt locations from asking for tips. One TikToker put her own employer on blast recently for this very practice, making a joke about how the business’ standard iPad payment processor asks customers for a tip.

The TikTok, posted by user Maddie (@maddiemischak), shows her turning around her iPad for the customer to reveal the tipping section. While she does this, she holds a stoic expression.

“POV: I’m the employee at the self serve frozen yogurt store asking you for a tip,” she wrote in the text overlaying her video.

In the comments section, Maddie herself said she does not understand the tipping process for such a business.

“I do ask for tips but obvi I don’t expect any because I understand the nature of a self serve restaurant,” she wrote. “I wouldn’t tip me either guys it’s okay.”

Later comments indicate that this is a standard part of the business’ payment program and that Maddie has no control over the screen asking for tips.

“Everyones been hating on these tablet places but im sorry im required to turn the tablet around to ask for a tip,” one user wrote in the comments, to which Maddie replied indicating her approval.

Other commenters showed their disdain for this tipping process.

“If you ain’t serving me at a table in the restaurant I ain’t tipping,” one user wrote.

“I will dead stare back and leave no tip if it’s a self serve,” another added.

In contrast, some users said they would gladly tip a worker like Maddie.

“I tip people just for being friendly,” a commenter shared.

“I always tip,” a second contributed. “I can afford it and am happy to share my good fortune with a good customer service employee.”

Other commenters in service positions with similarly confusing tipping dynamics offered their own thoughts on the situation.

“I work at a dry cleaner with a drive-through. I make $10 an hr. It’s hard work w no AC,” a TikToker revealed. “When someone hands me $2 as a tip it makes me feel human.”

The Daily Dot reached out to Maddie via TikTok comment.