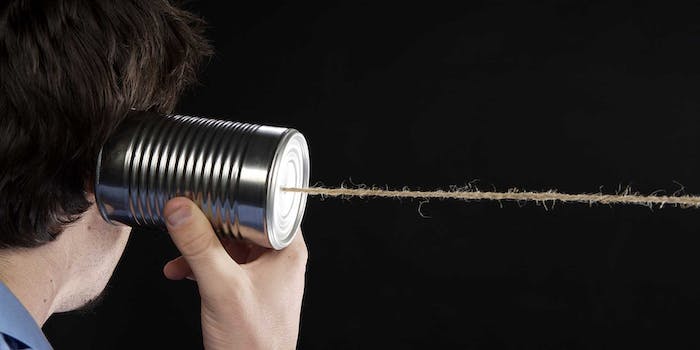 Meet Tin Can, the ‘ridiculous’ social network that runs without the Internet

Stop right there. No need to say a thing. Mark Katakowski, knows exactly what you’re going to say about his new app before you blurt it out. In fact, he’ll be the first to admit: It’s a pretty ridiculous idea.

But once you’re past the initial frivolousness of what his app does, you might just have the same realization he had: This has the potential to change social media forever.

Tin Can (download here) is a phone-to-phone messaging app that requires no Internet connection or cell phone service. With roughly the same signal strength of literally two tin cans connected with a string, Katakowski’s app can send signals only a couple dozen feet at most.

But freed from the constraints of a network, that short transmission radius could enable crowds to communicate regardless of disruptions—a potential godsend for everyone from protesters, to natural disaster victims, to concert goers alike.

“The idea was germinating in my head for about three or four years,” Katakowski, founder of Web community Hubski, told the Daily Dot. “It just seemed like something our phones should be able to do.”

Indeed, the technology behind Tin Can is not ground-breaking. The app uses the transmission capabilities inherent in any wifi-enabled device to support a one-to-many messenger app (à la Twitter).

By default, these messages pass to any other Tin Can enabled phone. Every phone with Tin Can will work as a relay point. But users don’t have view every message: They can set up the app so to view just the messages from selected followers. If a follower’s message can’t reach you by jumping from phone to phone, you won’t receive it.

In a world where we’ve become accustomed to the ability to send messages around the globe within seconds, this might not sound like a particularly useful tool. After all, with Tin Can, the only way your message is getting from Austin to London is if you walk by another Tin Can user who then gets on a plane bound for that destination.

But increasingly, social media is proving its importance on the local level. In the aftermath of Hurricane Sandy last year, a Facebook page became an aggregator of critical news for the storm’s survivors. And countless pieces have been written lauding the role of Twitter in the Arab Spring movement.

In both situations however, social media is unreliable because it requires a network to prop it up. Storms can take down cell towers and totalitarian regimes will censor access.

If it works as planned, Tin Can could remove these obstacles.

For technical support and advice early on, Katakowski worked with Serval, a humanitarian group that seeks to bring telecommunications to impoverished and remote parts of the world. He’s also gotten inquiries from humanitarian workers in Syria, where the government has been known to curtail communications among rebels by shuttering Internet access.

But it’s not just in these dire circumstances. Katakowski sees first-world users being able to take advantage of Tin Can at concerts, sporting events, festivals, and other places where wifi and cellular access may be limited.

Though it’s presently set to debut on the Google Play store, and later Windows, Katakowski strongly suspects that Apple will refuse to allow the app for iOS devices. Katakowski concedes there are some valid security concerns with Tin Can: A device-to-device based network could rapidly spread malware and viruses as easily as it can spread messages. He notes, however, that the messages themselves don’t contain any data linking back to a particular phone. Thus the messages become untraceable.

Though he acknowledges the risk, Katakowski believes Tin Can will be able to manage them and that the potential payoffs outweigh the concerns. He’s hoping users will feel the same way.

“We call it this ‘ridiculous idea,'” Katakowski said. “But it’s something that I couldn’t stop thinking about. And now here we are.”