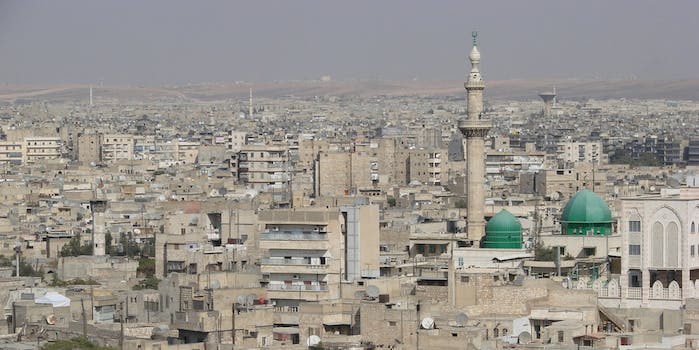 Syria’s largest city cut from the Internet as fighting intensifies

Experts say that the city of Aleppo, the site of some Syria‘s most intense, horrific fighting, has dropped offline.

Aleppo is the site of what might be the most important battle in the battle between the Syrian government and rebel forces, who have clashed there since July.

An embedded reporter for the BBC captured footage Monday that allegedly shows the aftermath of an incendiary bomb attack on an Aleppo school, killing ten children and wounding countless more. The White House announced Wednesday that it believed Aleppo was a likely target for a chemical weapons attack.

This certainly wouldn’t be the first time Syrians suddenly found themselves unable to communicate online. According to some residents, Internet access was cut off specifically in Aleppo for at at least once before, for a week in mid-August.

Syria has repeatedly lost complete Internet connectivity in its two years of ongoing civil war, perhaps more conspicuously than any other country in recent memory. Its government has blamed the outages on damaged fiber optics cables.

Western experts have openly doubted those claims, however, prompting speculation that the country has a so-called Internet kill switch.