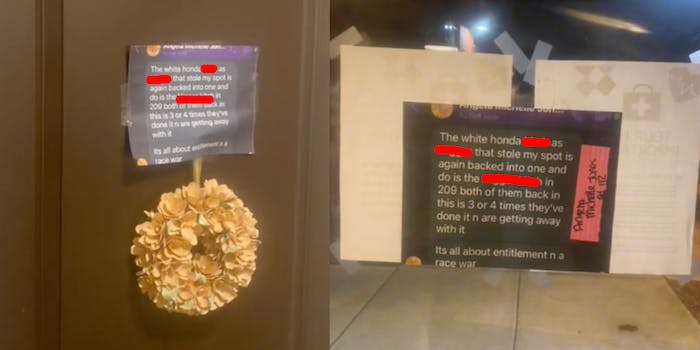 ‘​Why not show the whole building what you been saying?‘: TikToker exposes neighbor’s racist Facebook messages by plastering them around apartment complex

The neighbor is now reportedly getting evicted.

A TikToker’s straightforward method of exposing her racist neighbor is turning heads online.

A video from user @breezii_29, who simply goes by Breezii on her page, sees the 30-year-old exact revenge on a woman who lives in her apartment complex.

The less than 30-second video begins on a Facebook photo of the neighbor in question, who Breezii seemingly identifies. A bespectacled white woman’s face flashes by before the screen shifts to show the neighbor’s Facebook page, which identifies her as an Asheboro, North Carolina resident.

Then we arrive at the meat of the video: A Facebook direct message conversation allegedly between the neighbor and an unknown person. The first screenshot shows two messages from the neighbor, both proclaiming her extremely problematic opinions of her neighbors. The first sees the neighbor call one of her neighbors a “white Honda b*tch as (sic) [N-word].” She calls another resident “the [N-word] b*itch in 209,” before noting that “its all about entitlement in a race war.”

The video notes, via text overlay, that the neighbor “felt bold and comfortable enough to talk like this to other neighbors.”

In response, Breezii let the neighbor’s words speak for themselves. The next moments of video see her retribution play out, as enlarged, printed-out versions of the neighbor’s message appear plastered all over the apartment complex. One version of the message appears to be posted on a community board, another is taped to one of the complex’s doors, and a final version is secured to the outside of the neighbor’s apartment door. The image of the door is accompanied by another text overlay, this time wondering why Breezii shouldn’t show “the whole building what you been saying.”

The video then pivots to show another alleged direct Facebook message from the neighbor, this time reacting to her recent exposure. Noting that someone “blue up” her racist comments, the neighbor complains that the conversation was “supposed to be private” before revealing that she is on the road to eviction. Apparently, the comments were her third violation, she noted. The end of the message sees the neighbor attempt to play the victim, noting that she refuses “to ever trust anyone here again.” She also makes the assumption that the women she used slurs to describe might “do something to my car as well as me.”

In the comments section, Breezii explained that the eviction paperwork was underway as of Sept. 28. Apparently, other neighbors complained about the neighbor too and sent the apartment manager additional screenshots of her “racist rants.”

Viewers were thrilled to learn that the neighbor apparently faced consequences for her actions. Several noted that she likely won’t learn anything from the situation, however, given that she was on her “third violation and she can’t see she’s the problem.”

Another user expressed bafflement at the neighbor’s way of thinking. “Parking spot = race war? Any minor inconvenience is okay to excuse racism I guess,” they wrote.

The Daily Dot reached out to the purported neighbor and Breezii.