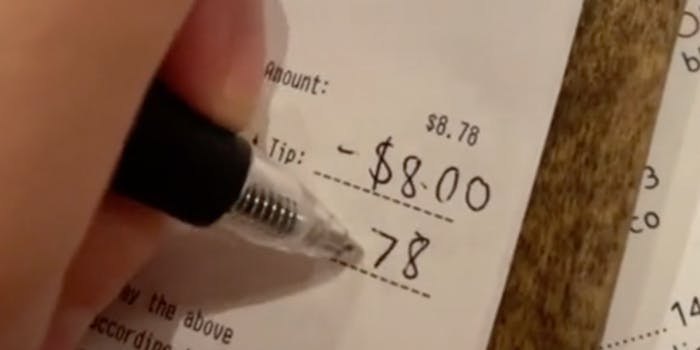 ‘Just say you’re cheap and keep it moving’: TikToker slammed for revealing divisive ‘easy hack to get a cheap meal’

Some believe it's a joke, but servers in the comments don't find it very funny.

Tipping is always a popular topic on TikTok—the Daily Dot has reported on tipping videos that went viral on multiple occasions—but sometimes the methodology just stands out.

For example, a TikToker has shared a video where she attempts to void the total by applying a tip with a negative value. On her tab of $8.78, she attempted to leave a -$8.00 tip.

“Easy hack to get a cheap meal!” she captioned her video.

In the comment section, there are two camps: those who think she’s serious, and those who think it’s a joke. Worth noting is that there is a second check already signed in the top left corner at the beginning of the video.

Those taking this seriously are mostly people who claim to be current or former waitstaff who have seen similar attempts before. One user claimed that if a customer tried to cheap out on the tip, they reauthorized their card for different payment amounts.

Another commenter said they would input the total as if it were an $8.00 tip.

Others just told the poster to say she’s cheap and “keep it moving.”

For those who took it as a joke, the fact that others took the video seriously is what they’re taking issue with.

“Y’all don’t get the joke and it shows,” one commenter wrote.

One person even admitted to doing this themselves at one time.

“Ok I did this once because the place added a tip to my bill but I ordered (with) a waiter, someone else brought the food and I never saw anyone again so I said who am I tipping,” @courtneydelelys wrote. “Also they still charged me so.”

The Daily Dot could not reach the original poster of the video for comment.