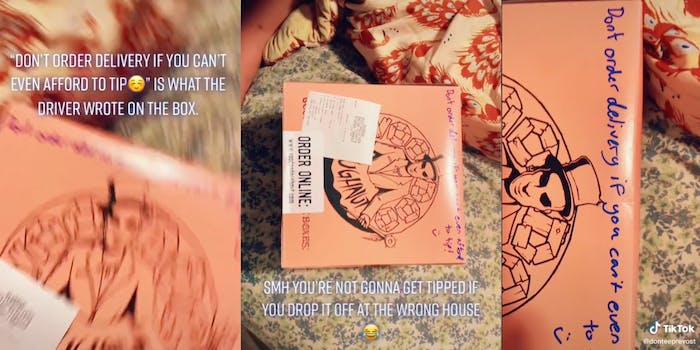 'I'm not tipping if they deliver to the wrong address and write some snobby remark on my food.'

A delivery driver’s note on a customer’s Voodoo Doughnut order has sparked a tipping debate on TikTok.

The video, shared by Dontee Prevost (@Donteeprevost), has nearly 90,000 views and many comments shaming the creator for appearing not to tip.

On the Voodoo Doughnut box, the delivery driver wrote: “Don’t order delivery if you can’t even afford to tip.”

However, the poster later clarified in the comments that they did not even order the donuts, telling one commenter “I didn’t order the food” and that it was “delivered to the wrong house.” The note left on the order indicated that whoever the order was intended for did not tip ahead of time.

“I’m not tipping if they deliver to the wrong address and write some snobby remark on my food,” Prevost wrote.

Many viewers seem to be under the impression that the poster was the one who ordered the donuts and shamed them for not tipping.

Others believe that even if the order went to the wrong house, the recipient should’ve tipped.

And some are defending the poster against backlash.

“The driver literally dropped it off at the wrong house and you guys are still defending the driver (for real),” @Kelvinrobinson5 wrote.

There were also people who said the note would’ve deterred them from tipping. “I always tip cash after they deliver so I can tip accordingly… had I seen this note I wouldn’t at all,” @treenabeanaaa wrote.

In many other countries, tips are much less common, as it’s already included in the price customers pay as a service charge or gratuity. Being expected to tip and shamed for not doing so is something very American in nature, according to some commenters.

“We don’t tip in Asia… sometime we do but its no common… we (have) service tax… so nobody (have) to worry on the tip part,” @meowwwwwwwwgggg wrote.

In the U.S., it is generally accepted that service workers should be tipped, as many pay structures factor it in. Servers, bartenders, and delivery drivers all heavily rely on tips as their wages often aren’t livable. The amount can vary, but according to Consumer Reports, most would say 15% to 25% would be a safe harbor.