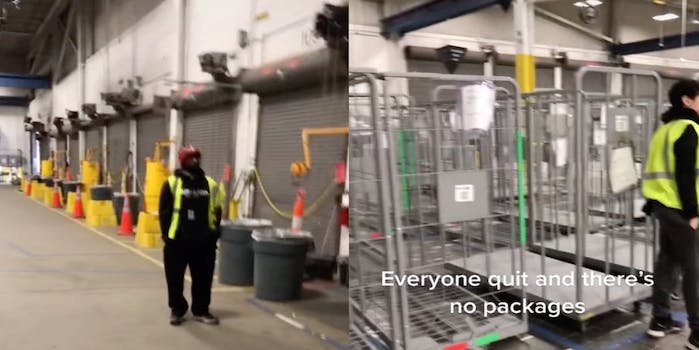 Less than a week after Jeff Bezos rocketed into space on his own spacecraft, a TikToker claimed the majority of employees at an Amazon fulfillment center “quit,” halting distribution.

“There’s no packages,” the on-screen text reads in the TikTok as “Bezos I” by Bo Burnham plays in the background. Seven employees in neon yellow vests stand around apparently empty racks.

The video garnered more than 167,200 views and added to the ongoing debate on exploitative working conditions for Amazon workers, from superiors telling workers not to pack up even one minute before the end of their shift to tracking breaks.

“Wouldn’t it be funny if every Amazon employee quit while Jeffrey was in space?” one user commented.

Some viewers said they applauded the workers for quitting and hoped companies would listen and treat them with more respect. Others said big companies like Amazon would eventually just replace workers with robots.

“Amazon is depressing,” one user commented. “I want to quit but no other job pays well here. Stuck.”

In 2018, Amazon raised its minimum wages to $15 per hour, which the company has used to argue against the formation of labor unions. During the pandemic, the company hired employees at record levels as more people turned to online shopping for goods. However, concerns of unsafe working conditions and low morale among workers remained.

One viewer claiming to be an Amazon driver said the video was not real.

“No, everyone didn’t quit,” the user commented. “All the vans went out for the day so all packages are gone. I drive for Amazon. I know what a warehouse looks like.”

The TikTok creator, @dominic_giannini on TikTok, has posted a few other videos about being an employee at Amazon. One video claims to expose managers for not wearing masks, and another shows that bathrooms are never open when he clocks in.

Regardless of the video’s validity, others said this was the reason they were content with waiting longer for shipping.

“We are so spoiled expecting junk in two days,” one user commented. “I’ll choose my non-plutocracy organic five-day delivery okay.”

The Daily Dot was unable to reach the TikTok creator for a request for comment and has reached out to Amazon.