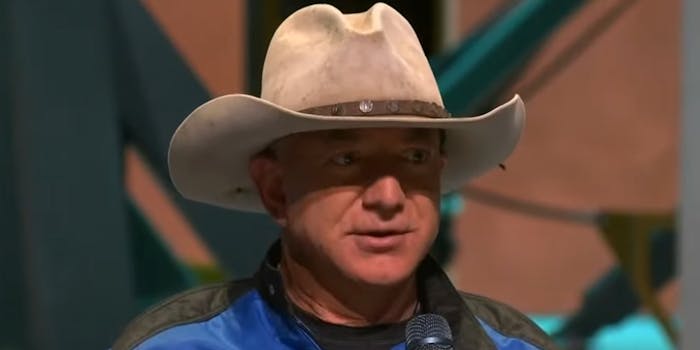 Where else could the money have gone?

Fresh off his short sojourn into the stratosphere in his shaft-like spacecraft, former Amazon CEO Jeff Bezos sat down for a laudatory session with the press to praise himself and his efforts.

But during it, he let something slip.

Bezos today became the first civilian to privately fund a trip above the Karman Line, when a rocket by his company Blue Origin took him and three others to the edge of the Earth.

Bezos sunk an estimated $5.5 billion into the venture, and after he landed, he said he couldn’t have done it without people shoveling money into his massive e-commerce site.

“I want to thank every Amazon employee, and every Amazon customer, because you guys paid for all this … thank you from the bottom of my heart very much,” Bezos said.

The thanks to every Amazon customer is… whatever. The millions and millions of people who choose to use Amazon have known for years they were fueling Bezos’ absurd wealth and continue to choose to. Congrats, they got a knockoff Instant Pot for $59.99, 48 hours after they felt the urge to have one, and Bezo got to build a rocket.

But thanking workers is quite innervating. Amazon workers are subjected to brutal and hostile worker conditions, environments Bezos supports and fosters.

That $5.5 billion he used didn’t come thanks to Amazon workers, it came because Bezos chose to work them practically to death for $15 an hour.

They didn’t ask for that money to not go into their paychecks; their CEO decided it was more important for him to have than for tens of thousands of people to be lifted out of precarious work and life situations.

It was, essentially, saying the quiet part out loud.

Of course, this is all no longer even Bezos’ problem. He stepped down as CEO earlier this month.