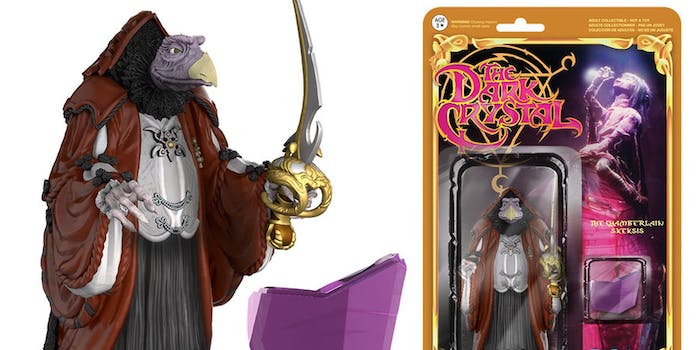 The three suns have aligned for toy collectors!

The Dark Crystal has been ripe for a collectibles line since its 1982 release, but there have been very few attempts to make one. Funko, the folks behind the super cool ReAction line of figures from nostalgic films, have decided to take up the gauntlet.

Funko announced on its blog that The Dark Crystal series is coming in October and will feature five different figures, including Gelflings Jen and Kira, grumpy soothsayer Aughra, mewling Skeksis the Chamberlain, and UrSol the Chanter. Fezzgig, Kira’s mop of a pet, comes packed in as well with its laughable open-mouthed scream from the film. Each figure in the series also comes with a piece of the Dark Crystal, which you can reassemble to gather your characters around to recreate that chilling final scene from the film. They will retail for $19.99-$24.99 separately, or you can get all five for $89.99.

The figures already have listings on Amazon, but there’s no exact date revealed just yet. You can still start your collection now though, and get Funko’s San Diego Comic Con exclusive figure of Jen with his Landstrider.

Then just papier-mache your own Great Conjunction, and you’re good to go.