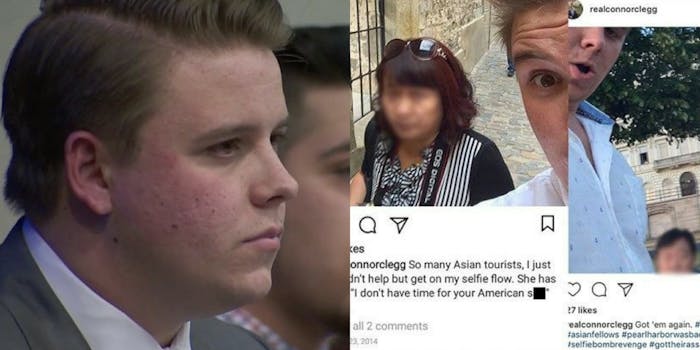 Connor Clegg had two days left in office before his impeachment.

Texas State University in San Marcos has impeached its student body president over Instagram posts from 2014 in which he made racist and sexist comments toward Asian people and nuns.

According to Austin ABC affiliate KVUE, Connor Clegg was impeached after a roll call vote on six violations on Monday. In February, KVUE covered Clegg’s Instagram posts in question, which included the following captions on selfies of Clegg with random Asian people:

“So many Asian tourists, I just couldn’t help but get on my selfie flow. She has that, ‘I don’t have time for your American shit,’ face.”

Another post Clegg shared was a compilation of photos of nuns walking in the street with the hashtags, “#holybooty, #idcloisterthatass, #penguins, #gawwwwd, and #amen.”

At the time Clegg apologized for the posts, telling the student paper that it was “was stupid, it’s stupid high school, locker room talk if even.”

“I remember I was in Europe, having fun and at the time I thought it was funny. Now, I can guarantee that I have grown up since then,” Clegg said.

According to the school’s Pan African Action Committee, Clegg also called for the school paper’s editorial board to resign or have the paper not be funded through student fees. Clegg’s call to action came in response to an opinion column that questioned the concept of white identity.

The committee alleged in November that Clegg hadn’t responded to fliers posted around campus associated with Nazi organizations and had vetoed a student government vote to bring an immigration attorney on campus.

Before his impeachment trial, Clegg told KVUE, “I have learned from the error of my ways and I hope that this campus can move forward in a very positive direction. I want people to focus on the good this administration has done.” However, according to the Austin-American Statesman, Clegg encouraged the student government senators to vote him as guilty, saying he worried for their safety if they were not to.

Across Twitter, Texas State students cheered the result of Clegg’s trial, sharing footage from the scene as well as memes celebrating Clegg’s removal.

Connor Clegg has now been convicted of violating the Student Government code or constitution under all six of the articles of impeachment, and has now been removed from @txstSG office. pic.twitter.com/VjBOuDCiVq

“Based on all 6 articles of impeachment Connor Clegg is hereby removed from office” pic.twitter.com/URR2J0sckc

Reporter: How Do You Feel About Connor Clegg being Impeached?
Me:pic.twitter.com/OiaMqpO5NA

HEY HEY, HO HO, CONNOR CLEGG IS ABOUT TO GO! With a vote of 37 to 14… HE WAS FOUND GUILTY pic.twitter.com/ViUiCStzjZ

Clegg has 48 hours to leave office but can appeal his decision within three days. He only had two days left of his term before his impeachment, however, and told KVUE he’s focused on graduation and starting a new job.