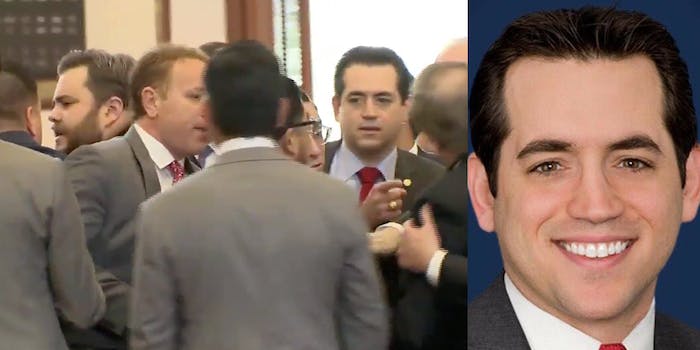 Chaos ensued during the last day of Texas’s legislative session after a Republican state lawmaker called immigration authorities on sanctuary city law protesters, leading to an exchange of threats and a scuffle on the House floor.

According to the Texas Tribune, the House took a 20-minute break on Monday after protesters of Texas’s Senate Bill 4, the sanctuary city ban that required local governments to cooperate with federal immigration authorities, chanted and cheered against the controversial bill from the gallery. SB4 has already been signed into law by Gov. Greg Abbott. According to the Texas Observer, more than 1,000 immigrants rights supporters attended the protest, which took place throughout the Capitol building and front steps.

#SB4 protest in the House. Chants of "#SB4 is hate." Signs saying "See you in court" & "See you at the polls." Gallery being cleared #txlege pic.twitter.com/mLSJ9152gj

A handful of Democratic lawmakers looked up to the protesters and clapped in what they said was support of their first amendment right. That’s when the threats and scuffle ensued.

According to multiple Democratic lawmakers, state Rep. Matt Rinaldi, R-Irving, told state Rep. César Blanco, D-El Paso, that he had called Immigration and Customs Enforcement (ICE) on the protesters, some holding signs that Rinaldi said read, ‘We are illegal and here to stay.'”

“He came up to us and said, ‘I’m glad I just called ICE to have all these people deported,'” Rep. Blanco told the Tribune.

“He said, ‘I called ICE—fuck them,'” state Rep. Ramon Romero, D-Fort Worth, told the Tribune. Romero also said Rinaldi yelled, “Fuck you,” at them, to the “point where spit was hitting” their faces.

“We didn’t know what to do … A lot of people had signs that said, ‘We are illegal and here to stay,'” Rinaldi said. “They were disrupting … They were breaking the law.”

Nina Pruneda, a spokesperson for ICE, told the Observer that she didn’t know for certain if ICE responded to Rinaldi’s call and sent immigration agents to the Capitol.

However, Rinaldi’s action intensified emotions on the House floor. After the exchange, Rinaldi and Democratic lawmakers began rushing at one another, with others on the floor attempting to break them up. In a statement, Rinaldi said state Rep. Poncho Nevárez, D-Eagle Pass, “threatened my life on the House floor,” and that he was “pushed, jostled and someone threatened to kill me … It was basically just bullying.”

According to Rinaldi, Nevárez said he would “get him” on the way to his car, to which he then replied that if Nevárez were to get him, he would shoot the other lawmaker. In a press conference after the scuffle, state Rep. Justin Rodriguez, D-San Antonio, alleged that Rinaldi more specifically said he would, “put a bullet in one of my colleagues’ heads.”

WATCH: @RepJRod: “There was a threat made from Rep. Rinaldi to put a bullet in one of my colleague’s heads.” #txlege https://t.co/OAuQ6jzP01 pic.twitter.com/iz2dBzhMXN

Today, Representative Poncho Nevarez threatened my life on the House floor after I called ICE on several illegal…

However, Nevárez denied the account, tweeting that Rinaldi is a liar and “hateful.”

Texas Rep. @MattRinaldiTX says @poncho_nevarez threatened his life on House flr & "I made it clear I would shoot him in self defense."

He's a liar and hateful man. Got no use for him. God bless him. https://t.co/te13An7gwm