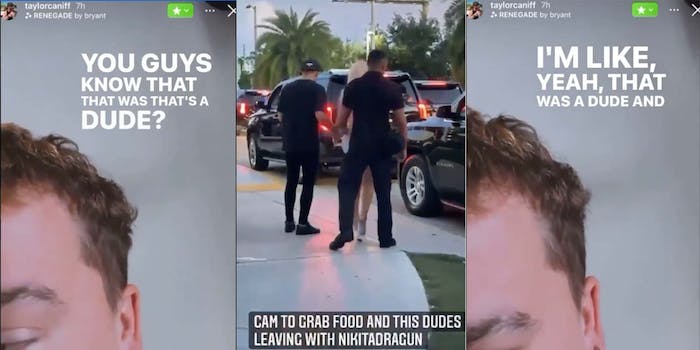 Video: Influencer Taylor Caniff under fire for trying to out Nikita Dragun to men standing near her, making transphobic comments (updated)

'This is disgusting. STOP TRANS HATE.'

On an Instagram Story shared to his friends on June 15, Taylor Caniff of Vine and OnlyFans fame called Nikita Dragun “a guy” and called one of his friends “down bad” for “‘hooking up with a man.”

Caniff was reportedly out grabbing food when he saw Dragun and began recording. In the video, the influencer also said he told men in the vicinity that Dragun was “a dude,” thus attempting to out her to them.

In response to the video, Dragun reposted it with the caption: “This is disgusting. STOP TRANS HATE.” The beauty YouTuber followed up with remarks about why Caniff’s actions were so harmful. “Trans lives are constantly under attack. simply living ur life becomes a threat to the ignorant. a simple misgender or side comment could cost us our lives,” she wrote.

Historically, murders of many trans people are legally defended by the LGBTQ+ Panic Defense, or “a legal strategy that asks a jury to find that a victim’s sexual orientation or gender identity/expression is to blame for a defendant’s violent reaction, including murder,” according to the LGBTQ Bar. First documented after the murder of Scott Amedure in 1995, the LGBTQ+ panic defense is accepted in a court of law in 34 states.

According to the Human Rights Campaign (HRC), “at least” 28 transgender and/or gender non-conforming people have been murdered thus far in 2021.

She added that she prays “to see the day that a man will love a Trans woman publicly without fear.”

Caniff fired back at Dragun, saying his comments about her were “facts.” The OnlyFans creator rose to fame in the early 2010’s alongside Vine personalities-turned-stars Shawn Mendes, Cameron Dallas, Austin Mahone, and Nash Grier.

After a similar incident on Survivor wherein former contestant Zeke Smith was outed without his consent on the reality series, Smith wrote a column for the Hollywood Reporter explaining why outing someone as trans without their consent is harmful.

“A person’s gender history is private information and it is up to them, and only them, when, how and to whom they choose to disclose that information,” wrote Smith. “When we share our gender history, many see us less authentically — doubting, probing or denying our identities.”

When reached for comment, Caniff told the Daily Dot he will “explain everything” in an upcoming YouTube video.

The Daily Dot has reached out to Nikita Dragun.