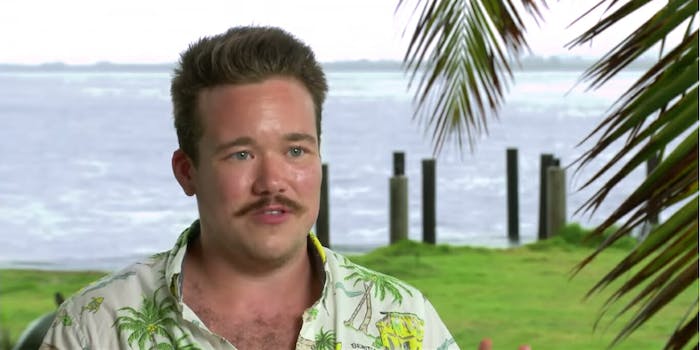 Being transgender is not a deception.

Remember Survivor? Well, in case you stopped watching in the early 2000s, contestant Zeke Smith, who was on the show last season, has returned for Survivor: Game Changer. And in last night’s episode, during the “tribal council” elimination vote, fellow contestant and former news reporter Jeff Varner outed Smith as transgender—in a move that not only left his fellow players floored and outraged but also much of the transgender community and its allies.

Varner, who realized that his chances on Game Changer were slim, decided to take a risky gamble: target Smith for his transgender identity to take the heat off himself. Outting him was his way, he said, of showing discontent and mistrust in the group. If successful, Varner hoped to throw his “deceptive” friend under the bus in exchange for staying on the show.

“There is deception here. Deception on levels, Jeff, that these guys don’t even understand,” Varner said at tribal council, before facing Smith. “Why haven’t you told anyone here you’re transgender?”

Varner’s actions immediately left fellow players and host Jeff Probst shocked and outraged, with many scolding Varner for outing Smith. The tribe unanimously supported Smith as Varner began to backpedal. And while Varner apologized for his actions, Probst stepped in once it was clear that Varner would be booted off the island.

In a first-person account for the Hollywood Reporter, Smith opened up about his experience on Game Changer, explaining how he became a Survivor superfan during his gender transitioning.

“Transitioning created the opportunity to remake myself—to really consider and construct the man I wanted to be,” Smith writes. “Whether I was conscious of it or not, ‘Survivor player’ became part of the remodel blueprints.”

“In proclaiming ‘Zeke is not the guy you think he is’ and that ‘there is deception on levels y’all don’t understand,’ Varner is saying that I’m not really a man and that simply living as my authentic self is a nefarious trick,” Smith wrote. “In reality, by being Zeke the dude, I am being my most honest self—as is every other transgender person going about their daily lives.”

While Smith chose to forgive Varner for his actions, the two are no longer as close as they were during the show. Smith highlighted how it’s unlikely that Varner hates trans people; rather, it seems that Varner was playing into trans panic in order to gain support on the show.

It’s true. Varner’s actions invoke feelings that trans people can’t be trusted because they are “hiding” their birth gender. And even though Varner is an openly gay man who has voiced opposition to North Carolina’s former anti-trans H.B. 2 bill, what he’s said and done is not to be excused. It sends the message that trans people aren’t trustworthy because they aren’t living in a cisgender body.

Trans people, however, do not need to out themselves as transgender to be real or authentic. Trans people should be freely given the opportunity to openly identify as trans or keep that part of their identity private. That’s a choice that was robbed from Smith by Varner, who has now pushed him out into the public spotlight as a transgender man. What’s even worse, Varner is a gay man himself. He should have known better than to publicly out—and try to shame—a fellow LGBTQ contestant.