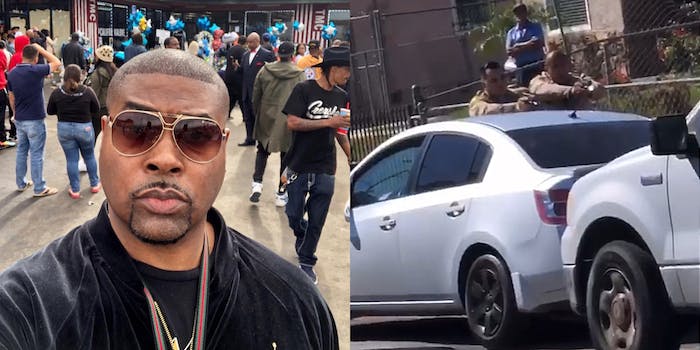 This noted provocateur had quite the take.

The police shooting of yet another Black man has turned into raciolinguistics, as controversial “historian and racial sociologist” Tariq Nasheed called one of the deputies, clearly a brown man, a “white Hispanic.”

On Monday, Los Angeles County Sheriff’s deputies killed a Black man, identified as 29-year-old Dijon Kizzee, in an occurrence sparking a new round of outrage in the South Los Angeles neighborhood of Westmont.

“A white hispanic race soldier shot a Black man in the back today in Los Angeles and killed him,” the provocateur tweeted.. “This happened in the Hoovers on 109 & Budlong. This is that ‘BLacK & bRoWn cOaLitiOn.'”

Singer and Broadway performer Mauricio Martinez tweeted in response: “I think you’re confused. The cop in the picture is most likely a Latino. He’s not white. If he were a white hispanic, he would be a Spaniard. From SPAIN. Ethnicity & race are mutually independent. For example: I’m Mexican, and I’m white. Race is not an issue here.”

It did not take long for supporters of white nationalists and white supremacist-adjacent people to come out of the woodwork.

Singer and conservative activist Joy Villa wrote: “What the hell is a white hispanic? That dude is browner than me. Get off the race baiting train, brother, you’re embarrassing yourself again. Stop trying so hard to start a race war and get famous. It’s tired.”

“Tariq, i know you hate white people but there is clearly nothing white about police officer,” said @TheRightMelissa, a noted “Trumpublican,” going on to misrepresent random statistics. “Do you know that Police actually shoot more whites than blacks. Blacks are 13% of the population and commit 53% of the voilent crime Could that be a reason for the 9 blacks killed in 2019?”

Nasheed’s comments have allowed this user, and others like conservative commentator Carmine Sabia, to flourish by allowing them to peddle misinformation about the incident and use anti-Black rhetoric. For example, Sabia introduced factually incorrect information:

“Ah yes here we go again with the fabled ‘white Hispanic,'” he starts. “How about this? The GUNMAN was shot by police because he was brandishing a GUN. Being black does not automatically = innocent unless you are Tariq Nasheed. Stop pulling guns.”

At the scene, many have questioned why deputies fired at Kizzee, although it was reported by the county officials that he wasn’t holding the weapon he allegedly had in his possession.

The county said the shooting transpired at the end of a pursuit, while also alleging that the man struck one of the deputies on scene.

The deputies say Kizzee dropped a bundle of clothing he had been carrying, where they spotted a black handgun. Dean said they both opened fire, killing the bicyclist. Dean described him only as a Black man in his 30s.

The incident arrives two months after the killing of 18-year-old Andres Guardado in Gardena by police, and roughly a week after the shooting of Jacob Black in Wisconsin.

People have begun congregating and protesting in the Westmont area where the man was killed.

“How many more times do we have to gather out here, mourning the loss of our brothers and sisters,” said an unnamed protester.

The district attorney’s office and the office of the inspector general were both on the scene immediately after the incident. Investigators have not said how many times or where the man was shot.

The investigation is ongoing.