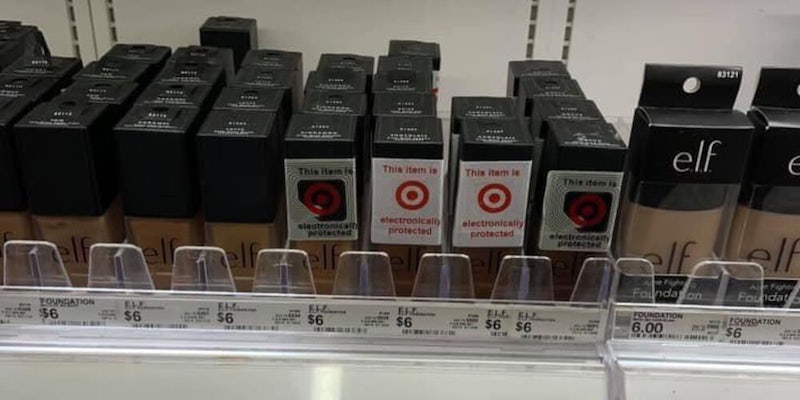 A viral photo that surfaced this week shows a Target store shelf of cosmetics with anti-theft devices—but only on darker shades of makeup.

A Twitter user shared the photo on Thursday, which has since been retweeted more than 16,000 times. The image shows a row of foundation bottles with only the dark shades bearing the Target logo and stickers that say “This item is electronically protected.” The location of the Target store is unclear from the image.

But while it was unlocked, the photo sparked anger. People said the placement of electronic stickers implied that darker shade foundations are more likely to get stolen.

Are they implying dark skin shades are the only ones being stolen?

Since the photo’s origins are unknown, it’s entirely possible that it was staged and/or that the other bottles of makeup have electronic anti-theft stickers on the sides facing away from the camera.

Regardless, some people who commented on the photo exposed their blatant racism and insisted darker shades of makeup are the ones that get stolen more and implied that people of color are more likely to steal than light-skinned people.

“It’s trivial to add anti theft to All of them,” one user wrote.

They are the ones getting stolen the most.

im looking thru these replies of people saying bc “those are the shades that get stolen the most”…do y’all know how many white girls finesse? clearly not lmaoooooo plus they wear the darker shades to contour or “match their tan” lol

Well maybe it’s actually because that’s the shades that are being stolen?

One person had the perfect comeback: Black people don’t shoplift more, white people and other communities just get away with it more often.

No cap. I watched Asian men and women steal belts, shoes and bags right up out the store. Slick af in broad daylight all because NO-ONE EXPECTED THEM TO BE A SHOPLIFTER

The sad things is heuristics tell you it’s blacks, but the reality is it’s normally white, senior citizens or white women with strollers. These two demos are the least monitored, but the most likely to steal. If you worked in retail, you know the truth

In some tweets, people joked that Elf Cosmetics—which is known for selling makeup for as low as $1—isn’t losing much anyway.

And others sardonically suggested that the electronic stickers are in place not to dissuade people of color from stealing, but to dissuade white people from wearing blackface.

Target’s customer service account @AskTarget responded to the photo and asked the user to share the location of the branch. The Daily Dot has reached out to Target and will update this story if the retail chain responds.

Update 5:33pm CT, Nov. 8: This article has been updated to remove the Twitter handle of the user who shared the photo.