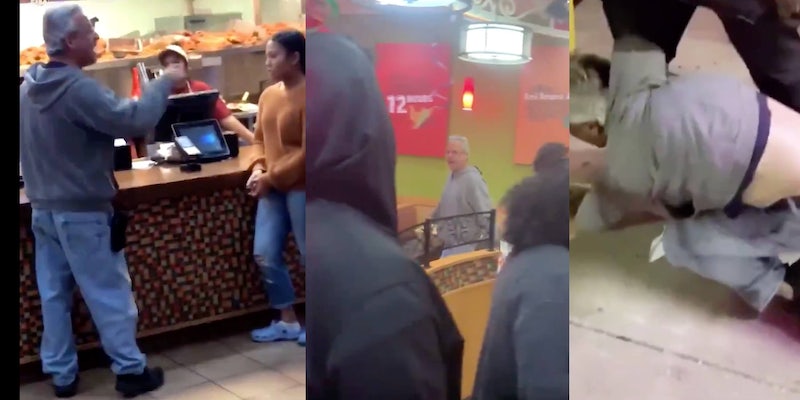 Popeyes chicken sandwich: Man made to apologize after screaming N-word

Popeyes’ chicken sandwich is back, and we already have the first racist video from its return to the menu.

According to a video that’s gone viral this week on Twitter, a white man repeatedly screamed the N-word at a customer as a group of Black patrons stood in line and watched; the man was then followed out of the Popeyes and made to apologize in humiliating fashion.

The 45-seconds-long video starts with the man screaming “fuck you” in the restaurant. The incident occurred at a Silver Springs, Maryland, Popeyes, as the user who posted the video tells the Daily Dot.

In the commotion that follows, recorded from behind a group of other customers, he’s heard continuing to scream, “Don’t you motherfucker, don’t you! Don’t you n****r!”

The store appears full of mainly African-American customers who watch on, horrified. The man repeats the N-word at least three more times, while a Black man is seen trying to escort a little girl out.

In a video taken by another user, he’s heard screaming “Fucking n****r-ass motherfucker, fucking get out of my way!”

Follow-up moments from this scenario shows some customers following him out the door and ultimately accosting him outside.

“Say sorry right now!” says one man while the racist white perpetrator is seen cowering on the ground while some people hold him down.

“I’m sorry!” he screams at one point before the video ends.

People on Twitter are applauding the customers who did this. Some are just baffled that a white man screamed the N-word in a crowd full of Black customers.

A lot of people thought the ending was a form of poetic justice because of the shock of seeing a white man at a Popeyes, which serves Louisiana southern fried chicken, screaming the N-word in front of a group of Black customers.

But this wasn’t the only Popeyes mishap since the chain decided to re-launch its famous chicken sandwich over the weekend. Numerous videos from different parts of the country show some form of brawl or conflict breaking out at Popeyes in the past week.

The video shows one man thumping on the truck of a customer before the driver gets out and punches the man to the ground. But this didn’t turn into a violent, racist tirade, and Twitter found ample humor in it, namely the reaction of the Popeyes worker.

Some can’t get over what the companion of the victim said in the video after he got hit: “When will you learn?”

I lost it when I heard “When will you learn?” Apparently old man has a bad habit!

And it generated a conversation on the overall responses to the new version of the chicken sandwich. It was a chance for Black people to sarcastically call angry white people fighting over chicken sandwiches “thugs.”

I would suggest we not eat these Round 2 sandwiches… These are definitely different… We got a stabbing, and a wypipo fighting video…. and it's only day 3…

This sandwich on another level when it got white folks turning on each other.

Other instances include two Popeyes employees getting into a fight in Ellenton, Florida.

According to the Daily Mail, a customer screamed at Popeyes employees because his order of 10 sandwiches was taking too much time in New York. The Mail also reported another instance of a Tallahassee, Florida, Popeyes where the employees got into such a big fight that the customers had to step in.

Popeyes, meanwhile, told the Mail that the response to the launch of the sandwich is “extraordinary and unprecedented” and that the “safety and health” of their employees “is always our priority.”