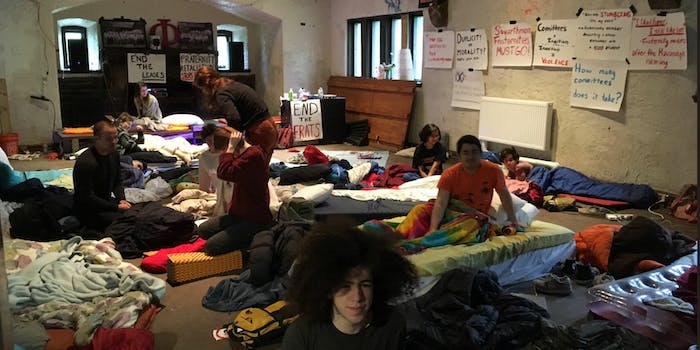 A Tumblr blog detailed women's accounts of being assaulted.

After students at Swarthmore College protested against two fraternities promoting rape culture—including one that had something called a “rape attic”—the two frats disbanded on Tuesday.

Students at the top-ranking Pennsylvania school were acting on leaked documents published by college publications Voices and the Phoenix that revealed minutes from Phi Psi meetings containing misogynistic, racist, and homophobic content.

The minutes were written between the spring semester of 2013 and spring 2014, according to the Phoenix. The publications reviewed what they say were hundreds of documents detailing parties and sexual encounters by frat brothers which, according to many of the descriptions, appeared non-consensual. The minutes include homophobic memes and descriptions of urinating on the intercultural affairs center. The documents also refer to the activities of another fraternity, Delta Upsilon (DU), that allegedly operated a “rape tunnel” and “rape attic.”

Students have since shared their personal accounts of being assaulted on a Tumblr blog titled “Why Swarthmore’s fraternities must go.” Their stories include having their drinks spiked, being raped or assaulted, witnessing others being assaulted, and the SWAT Team—the college’s “student safety resource and bystander intervention team”—looking past the many rules being broken at the frat house parties.

Eva Logan, a member of Organizing for Survivors Swarthmore (O4S) that organized the sit-in, told the Daily Dot that the Tumblr blog was started following the leaks. At least two of the accounts were by students from nearby Bryn Mawr College, which is about 15 miles from and has a partnership with Swarthmore College.

Join us for the sit in at Phi Psi if you feel comfortable pic.twitter.com/VfwHa1FRA5

Although the group’s Twitter account was created in May 2018, it had little activity until the last week of April, when it began organizing a sit-in at Phi Psi. About 200 students participated in the sit-in, a member of O4S told the Daily Dot over email.

Occupying students from the .@swarthmore Coalition to End Fraternity Violence were asked to wait in the basement den, which during parties becomes the Bar. Unclear whether shame or shamelessness led phi rez to get the cops to move our students downstairs while he packed. pic.twitter.com/95uTJwz50J

During parties, the so-called "living room" becomes a pitch-black dance floor. For "paint party," phi psi bros spray neon paint onto the crowd from the balcony that's attached to the upstairs bedroom. What's a bedroom, when the "living room" is a dance pit? Here's the bedroom now pic.twitter.com/rb6d09KXe1

And it eventually spread beyond the campus, with the Women’s March and students from Wellesley College taking note.

What @O4Sswarthmore students are doing is incredible. Pay attention to these young leaders. They are everything. https://t.co/xGCbqPzDXM

In the immediate aftermath of the leaked documents, Swarthmore reportedly suspended all fraternity activities on campus, and the college president issued a statement about their mission to continue holding students accountable.

By Tuesday night, both Phi Psi and DU released statements on their respective Facebook pages, announcing that they were disbanding.

“We were appalled and disgusted by the content of these minutes, which led us to question our affiliation with an organization whose former members could write such heinous statements. We cannot in good conscience be members of an organization with such a painful history,” read the statement from Phi Psi. “Since the start of our membership, we made it our mission to improve the culture and perception of Phi Psi. Unfortunately, the wounds are too deep to repair, and the best course of action for all those involved is to disband the fraternity completely and give up the fraternity house.”

“[The] members of Delta Upsilon have unanimously decided that disbanding our fraternity is in the best interest of the Swarthmore community,” read the statement from DU. “We hope that our former house will provide a space that is inclusive, safe, and promotes healing.”

Logan, a freshman at Swarthmore, said even though the decision is welcome, there’s a lot more to be done.

She also added that the former fraternity members still must be held accountable. “Even if the organizations are gone, the members are still here,” she said. “We can not forget the harm they caused on this campus.”

Logan further highlighted the administration’s previous reluctance to engage in the topic, and the negligence of public safety. “We do not want this to be a temporary victory,” she said.

American fraternities have long been known for their downright cruel, humiliating, and even violent practices. Rape and overuse of alcohol have become synonymous with frat culture, which most recently came under heightened scrutiny following the deaths of four frat students who died as a result of the “initiation ceremony.” It was only a matter of time before a movement seeking justice, especially in light of #MeToo, would actually arrive at some.