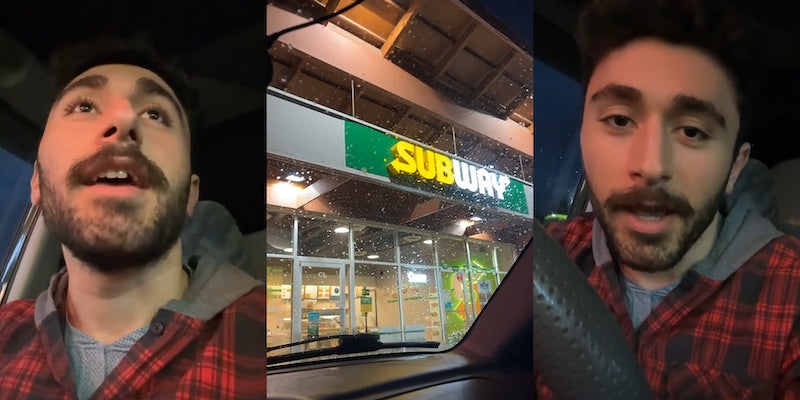 “Damn, people really different. I would’ve been in there at 9:59 being like ‘damn I almost didn’t make it'”: Customer refuses to enter Subway 7 minutes before closing time, sparking debate

'I don’t enter any stores within 15 min or closing.'

Social media has shown that customers play too much when it comes to a store’s closing time, but one Subway customer is blowing minds with his decision to not go into a Subway 10 minutes before it closes.

In a now-viral TikTok, Vancouver-based producer Yasha (@prodyasha.eth) films himself in his car and claims he can’t bring himself to go into the Subway because the store is going to close in 10 minutes. “Self aware head ass,” he captioned the clip.

“I just pulled up to my local Subway and find out they close in 10 minutes,” he says flipping the camera from the restaurant to himself. “I’m so hungry but I’m not gonna do that to the worker man,” Yasha says.

He goes on to say that he knows how it is when a customer walks in right at closing time and starts making demands. “It’s 9:53 right now, they close in seven minutes, some asshole like me walks in there, ‘Yo, let me get a food long,’” he says.

“Can’t do it,” he says, ending the clip. Since being posted, the video has amassed 241,000 views, with a number of other users weighing in on Yasha’s actions.

The nuances of how stores manage customers close to closing time have long been a subject of debate. Shopify even suggests that workers make an announcement 15 minutes before closing so customers can complete their purchases on time but without feeling rushed.

Many users completely agreed with Yasha’s thoughtfulness. “Everyone think I’m crazy but this is fact. I don’t enter any stores within 15 min or closing,” one person said. “Good man,” Yasha responded.

A number of people who work in food service thanked the potential customer for being so considerate as to not enter the Subway so close to closing time. “Bless you forever bro, from a Starbucks barista,” one said. “Thank you from a waitress,” another commented. “I work at a deli and we salute you,” a third said.

One worker even recounted their own interaction with a customer who was not as nice as Yasha was about his Subway’s closing time. “My work closes at 8:30, we stay until 8:45 and I had a Karen come in at 8:40 and YELL that no one was there to give her treatment.” Unfortunately, Karens chastising food service workers for not providing them service even though the store is closing isn’t an uncommon story, and the comment was liked by Yasha.

But, of course, there were some people who disagreed with the TikToker. “Damn, people really different. I would’ve been in there at 9:59 being like ‘damn I almost didn’t make it,’” one user commented. Another echoed the sentiment saying, “9:59 and I’m walkin in,” to which Yasha responded, “Savage.”

One person even questioned Yasha’s decision to not bother the Subway workers at closing time. “Why” the user asked. “[They’re] open until 10 and employees close up after that. As a former restaurant owner, we loved gettin last minute sales.” While the TikToker didn’t respond directly, many others pointed out that the crucial difference was that the commenter was an “owner” and not a “worker” at a restaurant. “Key word: owner. Your employees are tired after 8 hour shift of dealing with rude ass customers,” a user replied.

The Daily Dot reached out to Yasha via Instagram direct message.