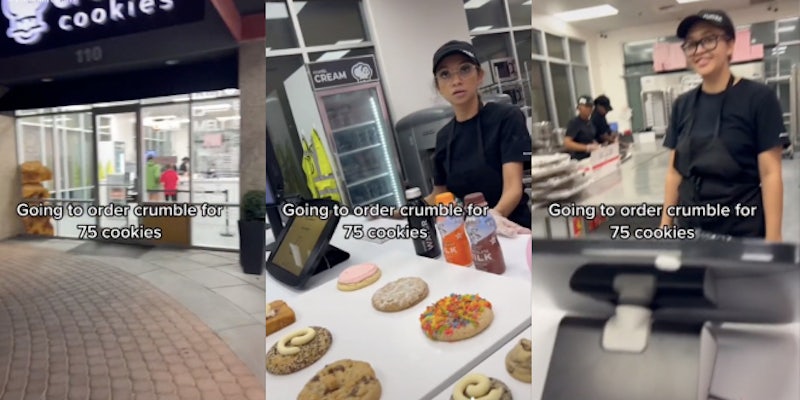 'I would tell you to leave.'

In a viral TikTok video, a customer plays a prank on the employees at Crumbl Cookies by asking them for 75 cookies at closing time.

The viral video, which has 1.7 million views and was posted by Sean Ward (@visionairedon), shows the TikToker walking up to a Crumbl Cookies location and explaining that the store’s closing time is in 10 minutes, but he’s about to walk in and ask for 75 cookies “and see what they say.”

Anyone who’s worked in the food service industry or retail knows how annoying it is when a customer walks through the doors close to closing time and then feels entitled to service, despite having arrived right when workers are supposed to leave. Thankfully, this time it was just a joke.

Sean proceeds to walk into the Crumbl Cookies store, goes up to the counter, and asks the cashier: “What would you do if I asked for 75 cookies right now?” The woman behind the register appears to be deep in thought about the question and takes a couple of breaths as if to say something but doesn’t.

Sean then asks a second employee the same question, but she seems to understand that he’s not serious and takes the request more lightheartedly. “What would you do if I asked for 75 cookies right now,” Sean reiterates.

Without missing a beat, the second employee responds, “I would tell you to leave.” She gestures toward the door. The TikToker laughs at her snappy comeback. The prank ends there, and the Crumbl employees are presumably left to close the cookie store at their regular closing time.

Viewers who commented on the post were amused, but some also took up for the Crumbl Cookies employees and their right to refuse service so close to closing time.

“If someone said this to me I would cry,” one user said.

However, most viewers understood that it was just a prank and saw the humor in the reactions of the two employees.

“The first girl was ready to do it but she was gonna hate her life,” another wrote.

But there were also viewers who accused the Crumbl Cookies employees of being “lazy” and said they made a mistake not fulfilling Sean’s order even though it was close to the store’s official closing time.

“I’m sorry but turning down the money for those 75 cookies is crazy,” another claimed.

The Daily Dot reached out to Sean via email and Instagram direct message and to Crumbl Cookies via email.

Update 2:30pm CT Sept. 23: In an email to the Daily Dot, Sean shared that they only purchased two cookies that night.

“I wanted to be the first to order 75 warm fresh cookies for my girl, we wanted 76 but we didn’t wanna push it lol,” he said. “So we decided to just get two cookies to end the beautiful night.”